"...a mark on our calendar, or a crash of bells at midnight maybe, reminds us that we have only recently been created." -- Clement A. Miles

The Chanukah bunny, you must know, already paid his visit to our house some weeks ago. Nevertheless he must have emailed Santa or someone before tumbling exhausted into bed re: today's date, for this ranks as the whitest Christmas to which I have ever awakened. 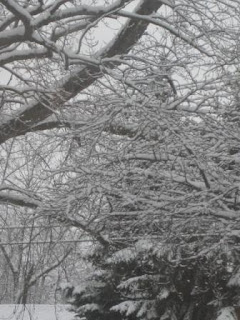 Lately I have been enjoying reading Clement A. Miles' Christmas in Ritual and Tradition, Christian and Pagan (1912) -- a work and an author not to be confused with Clement Moore of "A Visit from St. Nicholas" fame, of course. Miles' book drags on a bit with his everlasting enumeration of caroling traditions in upper Thuringia, and what eatables the peasants in Sicily traditionally laid out for the return visits of the dead on all souls' day. However, I have learned from him. He is the first writer I have come across to explain, albeit not very clearly, that Christmas as a feast of the birth of Jesus could not be established until after the early Church had decided on Jesus' true nature. Certainly, the 25th of December was, he says, a festival of the winter solstice

... the Dies Natalis Invicti [day of the birth of the unconquered sun], probably first celebrated in Rome by order of the Emperor Aurelian (270-5), an ardent worshipper of the Syrian sun-god Baal. With the Sol Invictus was identified the figure of Mithra, that strange eastern god whose cult resembled in so many ways the worship of Jesus, and who was at one time a serious rival of the Christ in the minds of thoughtful men. ... What more natural than that the Church should choose this day to celebrate the rising of her Sun of Righteousness ...!


Natural, but not until the Council of Nicea (325 A.D.) had settled a swirling early Christian controversy, decreeing that Jesus had been born the son of God and did not merely become such in adulthood after his baptism by John the Baptist, could Christmas -- Christ's mass -- exist. Without the Council establishing "the Catholic doctrine of the perfect Godhead of Christ," there would have been little excitement, and nothing of the supernatural, in celebrating the birth of an ordinary (and do we dare remind ourselves, Jewish) baby, no matter if his being did absolutely change at the age of thirty.

Then there is the weather of Christmas. Miles notices:

Again, without the idea of winter half the charm of Christmas would be gone. Transplanted in the imagination of western Christendom from an undefined season in the hot East [since the true date of Jesus' birth is unknown] to Europe at midwinter, the Nativity scenes have taken on a new pathos with the thought of the bitter cold to which the great Little One lay exposed in the rough stable ....


Last year a local radio talk show host complained about the ubiquity of the bland "Happy Holidays" greeting people use now. "It's Christmas," he said. "No one celebrates the joy of cold weather." He's right, of course, and Christians should not feel obliged to emasculate their language so as not to offend Jews or Muslims or anyone else who celebrate something else, or nothing at all, in December. Still, I can't think of any other holiday that remains so complexly bound up with other things besides the birth of a savior -- very temporal things, weather, astronomical observations, the angle of the sun in the sky, and with plain survival, with food, at the time of the year when both seem most iffy. Nor do I know of other civilizations, trapped in the same wintry latitudes as the Christian west, which fight off snow and cold with as weirdly exuberant a holiday. To read Clement Miles is to learn that, before they heard of Christ's mass, our pagan European ancestors were already long in the habit of celebrating a series of winter feasts beginning almost as soon as mild autumn weather went away in early November, and concluding only with the first hints of spring in February. It's as if they faced General Winter with a military maxim engraved in their heads: when surrounded and outnumbered, attack.

And anyway, what of that bland "happy holidays" greeting? Listening to endless versions of the song of the same name at shopping malls should remind us that the phrase, if it is traceable to that song and therefore to the 1942 movie Holiday Inn, literally wishes the listener happy holidays throughout the year ("may the calendar keep bringing happy holidays to you"). The movie, in turn, is about a hotel that is only open on holidays. Remember the painful scene in which Bing Crosby and Fred Astaire celebrate Lincoln's birthday by donning blackface and singing "Father Abraham" with a gaggle of awkward little black children? When the movie used to be broadcast on television, that number was often deleted. The point being that  when someone wishes you happy holidays, really he is wishing you a happy everything, Halloween, Valentine's Day, you name it. (By the way, Holiday Inn's Thanksgiving number, "I've got plenty to be thankful for," also is not one of Irving Berlin's best.) So literally the greeting isn't just spineless, it's goofy.

Now after all these random thoughts, let's make some eggnog. I have a recipe for it, spelled "Egg Nogg," which comes with strict instructions: "This," Martha McCulloch Williams says, "is the only simon-pure egg nogg. Those who put into it milk, cream, what not, especially rum, defile one of the finest among Christmas delights."

She should know. The cookbook is Dishes and Beverages of the Old South, originally published in 1913. Of Southern cooking, she continues, "it was through being the best fed people in the world, we of the South Country were able to put up the best fight in history, and after the ravages and ruin of civil war, come again to our own. We might have been utterly crushed but for our proud and pampered stomachs, which in turn gave the bone, brain and brawn for the conquests of peace."

Very well. Egg nogg, simon-pure, and a Merry Christmas to all.


"Have all ingredients, eggs, sugar, brandy, and whiskey, thoroughly chilled before beginning, and work very, very quickly. Beat the yolks of eighteen eggs very light with six cups of sugar, added a cup at a time. When frothy and pale yellow, beat in gradually and alternately a glassful at a time, a quart of mellow old whiskey, and a quart of real French brandy. Whip hard, then add the whites of the eggs beaten until they stick to the dish. Grate nutmeg over the top, and rub the rims of the serving glasses with lemon or orange rind cut into the fruit. The glasses should be ice cold, and also the spoons. Fill carefully so as not to slop the sides, and serve at once.

"If wanted for an early morning Christmas celebration, beat up yolks and sugar the night before, stand on ice along with the liquor, and keep the unbeaten whites likewise very cold. At morning freshen the yolks a little, then add the liquor, and at last the whites newly frothed. This is the only simon-pure egg nogg ...."

(If you want to try this for a much smaller crowd, you might halve the ingredients, or halve them again, or even again, supposing you only want to experiment for yourself. Could you use, say, 2 or 3 eggs, 3/4 cup sugar, and 1/2 cup each of the liquors?)
at January 20, 2014