From Gourmet's massive 2004 cookbook with the happy yellow cover, edited by Ruth Reichl. (But why do the recipe titles all have to be printed in yellow, too? So hard to see on the white pages.) You'll make a tasty little sauce for quickly pan-fried pork chops, albeit an expensive and a fussy little sauce, too. Unless you have all the ingredients on hand -- in which case, you will have already spent the money -- be prepared to shell out for balsamic vinegar, wine, dried tart cherries, cinnamon sticks, shallots, and a lime, plus the meat; and then there is the measuring out and the mixing of a few teaspoons of this and a tablespoon of that, to be all prepped and ready before you commence cooking. The prepping which professional chefs and bakers say is so important really does matter here, since the meal is so quickly made but does require so many little things.

Pork chops exude such divine juices of their own that I am not sure this sour cherry sauce might not taste better slathered over some needier grilled chicken, over a bit of too-dry duck, or even worked up into a pie filling (it is very sweet). But do please indulge, and decide what you think. Accompany it with an Argentinian malbec -- because they all seem to exude the appropriate tart cherriness themselves.

You will need (for the sauce):

Add broth and cherries, bring to a simmer, and simmer uncovered, until the cherries are plump, about 5 minutes. Stir the cornstarch and water mixture, add to sauce, and simmer and whisk for 2 minutes. Discard the cinnamon, and add the lime juice, salt, and pepper. Remove from heat and keep sauce warm, covered.

Then, pat dry 8 boneless 3/4-inch thick pork chops, and sprinkle with salt and pepper. Heat 2 Tbsp vegetable or olive oil in a heavy skillet over high heat until very hot ("just smoking"). Cook the chops four at a time, turning once, until just cooked though, about 6 to 8 minutes total. Keep the first set warm while you fry the other four.

Serve with the cherry sauce spooned over. 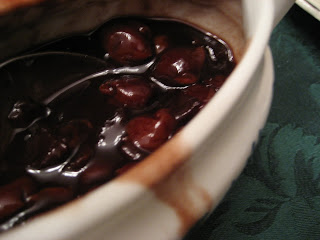