We have a large used bargain book warehouse nearby, where I like to go and shop sometimes. It's just next to the empty "big box" storefront which used to be a Sam's Club, until the Sam's Club left town to re-establish itself in the next town down the street, which has lower taxes -- now there's an interesting concept. I believe it was Margaret Thatcher who said, the facts of life are conservative.

Anyway, at the book warehouse I picked up a copy of the Wine Spectator from January of 2009. It's a good issue to keep, for it has a list of "the most exciting wines of 2008," specifically the Top 100 wines of the year, plus "our guide to great champagne." I am glad to tell you that the best wine of the year, for the Spectator's editors and writers, was Casa Lapostolle's 2005 Clos Apalta, a traditional Bordeaux blend of carmenere, cabernet sauvignon, merlot, and petite verdot from Chile's Colchagua Valley. If you see it, expect to pay $75 per bottle; but more good news is that there are a few wines of $17 or $18 on the Top 100 list, and even one of $12 (Leasingham 2007 Clare Valley riesling, Australia). One wine on the list has earned the full, the magic 100 points -- Chateau L'Evangile Pomerol, of course a red Bordeaux (merlot-cabernet franc), and from the glory year of 2005. Expect to pay $260 a bottle, but expect not to find it, either.

I thumb through the Spectator, and at the risk of sounding snarky I wonder who finds this overwhelmingly rich and informative magazine really useful, coming out as it does twice each month or so. This one issue, perhaps so well stuffed because it dates from the end of a year, would suffice as a study guide for me for a year. Score after score of wine reviews, never mind the profiles of wine industry giants who have taken on new and exciting positions Here, following upon well known fifty-year careers There, and even the ads, some of which are breathtakingly beautiful, amount to little lessons (what is "fleur de champagne"?). I can only surmise that the magazine serves mostly as a shopping guide for very knowledgable people who have a monthly wine budget, and want fresh advice on the best value purchases for the next fortnight's next fifteen or twenty bottles -- or cases, possibly.

This particular issue also features a little story, in the front-of-book Grape Vine column on page 14, about the French postal service yanking from circulation a lovely little stamp "personalized" for a wholesale wine distributing company called La Compagnie des Vins. (I gather it would be as if Southern Wine and Spirits had its own, legal and usable United States Postal Service postage stamp. Now there's a moneymaking concept ....)

The stamp's artwork shows a colorful, pretty, cartoon like woman, a sort of female Caravaggio Bacchus only less overripe and sinister looking. She looks out at us happily, wearing her crown of yellowing grape vine leaves, deep blue grapes dangling at her rosy cheeks. She carries a glass filled with red wine just near her pretty red lips. The background is lime green and stark black, at once modern and cheerful.

La Poste pulled it, "deeming it illegal, right up there with images of war crimes and pornography." The manager of La Compagnie des Vins is quoted as saying " 'in the current climate, winemakers or merchants are considered more dangerous than cocaine dealers.' "

What current climate? For some time now, bloggers and writers have been noting uneasily and perplexedly that France -- Lord have mercy, France -- has an anti-wine movement which seems to hold the whip hand over the French government. Winesooth wants to know why. Tom Wark at Fermentation suggested his own simple plan to destroy the French wine industry more efficiently. He was referencing a story from Decanter, one of many, about a potential law that would have actually forbidden wine tastings in the country. When directives policing wine consumption and advertising do pass into law and are enforced, it's France's main temperance group, the Association Nationale de Prevention en Alcoologie et Addictologie, that exults. They "were jubilant," for example, in 2008 when Moet & Chandon were fined 30,000 euros for running an ad campaign in which a champagne bottle appeared next to some pink rose petals, evilly uniting images of alcohol with beauty. Holy smokes, we can't have that. 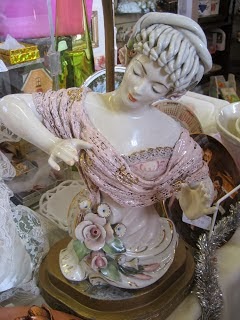 Antique mall find -- back when the French made lamps that were unabashedly French-y. I should have bought it when I had the chance.