Update, January 2015. Too funny: watch me try to be polite about Alice Feiring's crazy-aunt-in-a-boa wine book -- as if she knew who I was from Adam, or could hurt me -- only to end up sounding as pretentious and verbose as she does. That's the trouble with accepting free stuff, even books. It corrupts you.


I'm reading a book and drinking a wine, and I don't like either one of them. Of course it may be that my opinions are dopey, and so you may ignore all that follows.

The book is Alice Feiring's newest, Naked Wine: Letting Grapes do What Comes Naturally, published on September 1st. The good  people behind the book's marketing efforts were kind enough to offer me an advance copy, and I was flattered and delighted enough to say yes, please.

The wine I'm drinking -- or was drinking, until I put it on the shelf to cook with -- is no less than Stag's Leap Cellars "Artemis" cabernet sauvignon. The two go together, book and wine, because both come from famous and admired sources, and because the wine happens to be exactly the sort that the book rails against. Ms. Feiring is a well-known wine writer and blogger (The Battle for Wine and Love, or How I Saved the World from Parkerization, The Feiring Line) whose niche is precisely the railing against syrupy, high alcohol, berry-jam "global reds," how superbly crafted and Stag's Leap-ish soever they may be. And Stag's Leap is, well, Stag's Leap. We have met the winery and its legendary products before, and learned all about where to put the vital apostrophe. 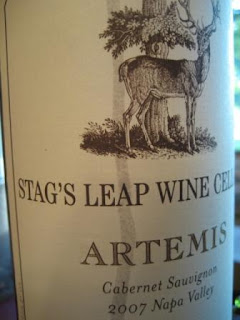 Alice Feiring's reputation comes from preferring and promoting what she calls "natural" wines instead, which are made without all sorts of preservative sulfur, extra yeasts, enzymes, and doses of oak essence to boost uniformly toasty-buttery, Robert-Parker-pleasing flavors. Natural wines, it would seem, tend to be light, acidic, European, of iffy longevity, and rather obscure. Their devotees also claim that by definition they must be "tastier and healthier," but really -- we must plunge right in -- why should this be? We've met the organic cult before, and we were forced to shake our collective head and tut "shmorganic." There's no reason why a grape (or a carrot or a blade of grass) raised in pre-industrial conditions should boast different properties than a grape (or a carrot, etc.) raised otherwise. It's a little like expecting that a human being raised Amish will be purer than another brought up among the moderns in Manhattan today. Then again, possibly for the environmental cult, aping the Amish is very much to the point.

Anyway in the first part of Naked Wine Alice recounts her efforts to create her own "natural" wine from a favorite grape, the Sagrantino, "in the style of the Umbrian town of Montefalco." She literally does crush a vatful of donated fruit with her feet and then leave the mess alone to see what develops. It's a good lesson: we grasp that the nice people at Gallo are not doing that.

I'm all for such experimentation and I'm all for less gloppy, monstrous reds. Even though I've liked my share of Apothics and Sandholdts, essentially chocolate-coated cherry caramels in a bottle, after a while they do so resemble a glass of Robitussin that they can turn physically sickening, sitting like a painful lump of lead in the stomach. I regret to say, Stag's Leap Artemis was like that, which is why it is going to end up in my first beef stew this fall.

So I am on Alice's side. The trouble is, one would have to already know all about this long-bubbling wine industry argument -- jammy, high tech California versus spiky, low-maintenance Europe -- before one could begin to decipher what she is trying to say. This is not a book for the newbie, and that's too bad, because wouldn't a wine writer of such passion want to reach the newbie?

In organization and in prose, Naked Wine is a hash. Everything seems to begin and end with personal anecdote; as a storyteller her right hand seems not to know what her left is doing. Though I'm glad she's well connected and has interesting information to provide, indeed I'm glad she "decided" to become a wine writer full time no really, the name-dropping, whether of places or people, never ends. Good luck keeping track of Kevin, or Bea, or Ridgely, or Montefalco in Umbria, or Filippo, or Pascaline. Oh, and it was a different Robert who got really mad at her when his Sonoma reds didn't show well at that exclusive private tasting in the eleventh-century monastery in the Loire. (" 'I could have saved myself a lot of trouble,' " Mr. Kamen railed, " 'if I had known what the group really was looking for -- bacteria-ridden wines that were so natural, six bottles out of twelve had to be thrown out. I don't make that kind of wine. I have a business to run.' ") Even her analogies are odd: likening the organic movement to the Weather Underground and the natural movement to Students for a Democratic Society, or was it the other way around, is not going to help young twenty- and thirty-something consumers and book buyers, a good portion of the market, understand what she is talking about.

For all the travels and the anxious research on the use and naturalness of sulfur (it's an element) and the sophisticated meals, Naked Wine left me feeling adrift in the company of some very provincial people. That sounds rude, but what else can we call industry insiders who are not aware that the organic/biodynamic/sustainable/drowning polar bears, etc., ship has sailed? Granted, these same people who, bless their hearts, think that the air routes between New York, Napa, and the Loire make up the navel of the world, will in turn find me desperately provincial. (Never mind me. Alice suspects that her professional nemesis, Robert Parker who loves thick jammy reds and developed the 100 point scoring system to reward them, must be too "sequestered" to know what good things natural winemakers are doing simply in their capacity as farmers earning a living.) But the sales activity in my corner of retail is not unimportant. After all, guess who is buying and selling all that moscato? And it seems to me that around here, nobody cares about green-friendly wines. "Natural," less Robitussin-like wines could be valuable, a fact which should please Alice. Only wherever they are, they can't help but be caught up in the same silly net with organic and sustainable, etc. This is why Alice has to hunt for careful analogies to clarify them all, though it's no help to turn to the campus news of forty years ago to do it.

She might have saved herself the trouble. If I am right to say wine buyers are not listening, it may be because they have heard of little matters like Climate-gate. Winemakers might save themselves the trouble and the money, too, especially since it's apparently not just the search for health and taste that is inspiring them. Incredibly, Naked Wine specifies major players who are actually making costly business decisions, in field and cellar, based on viewings of An Inconvenient Truth. Minor players pout that " 'all the cool kids are into sans soufre [without sulfur], and if you want to be cool ...' " (p. 112). And they are most unwisely passing their costs on to the consumer, who looks at the bottles and boxes with pretty ecru-colored labels stamped in butterflies and bees, looks at the price, and moves on. I recently put another ominously bulging ecru-colored box on the closeout rack, and the thing was only a 2009 merlot. Someone bought it, thankfully. I hope all those unsulfured microbes, careering heedlessly from one foam party to another, didn't entirely spoil the taste of it.

If she had written a clearer book, Alice could have led us all to the nice, zingy tipples she knows about. Two paragraphs for the Robitussin thing, then a list of putative natural producers, plus SRPs (suggested retail prices, $7.99 being the sweet spot for most), would have done the trick. Instead, after much hard thinking, she wrote a woozy, frustrating diary/catechism that makes the consumer want to bail. I'm sorry to say I bailed at page 83: "Desplats had given up biodynamics for a fascination with the farming philosophy of the Japanese master Masanobu Fukuoka ...." You might be able to last until the revelation about An Inconvenient Truth (p. 134), or possibly till this: "I had thought I was so damned clever the night that I had blurted out to Eric that at Ten Bells, the Chauvetists were really Néauportists. It looked as if I was wrong..." (p. 164).

Harrumph. So what am I reading for pleasure? Sleight of Crime: Fifteen Classic Tales of Murder, Mayhem, and Magic, 1977 -- Alice, by the way, reminds us this was the year Bob Dylan's first wife, Sarah, divorced him -- compiled by two men one of whom used to be the official Magician to the British royal family. No kidding. Did the house of Windsor also used to keep a dwarf as late as the '70s?

And what am I drinking for pleasure? A Frascati D.O.C. (white), "Le Contrade," and a Velletri D.O.C. (red), "Terre dei Volsci," both made by Cantine Co.Pro.Vi. Deciphering Italian labels is still a challenge, but I was told that with both these wines, we are in the vicinity of Rome. Both delicious. I have no idea whether either or both are natural, or yeasted and sulfured and enzymed and 90-pointed to death. Help us out, Alice, and never mind the rest. 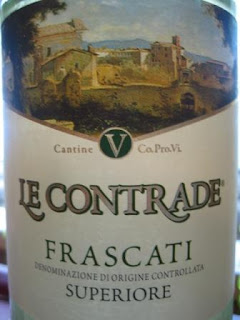 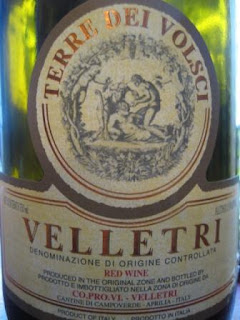