In the introduction to her great The New Making of a Cook, Madeleine Kamman writes, "It is probable, as you gradually become a dedicated cook, that over the years you will develop other related passions, such as for beautiful table appointments. There is yet another whole world of discovery and knowledge to be acquired in porcelain or pottery, crystal, table linens, and related flower arrangements."

She may be right. One thing leads to another. For my part I must tell you I have been led to a new hobby: porcelain. It so happens that lately I have been re-reading a delightful book called The Pageant of Georgian England, by one Elizabeth Burton, first published in 1965. I used to borrow it from the local library, but since the staff there cull old books and the Pageant is now missing, I decided to buy a copy from Amazon. Is this how we recognize a new Dark Age? -- one must rack one's brains trying to remember what the library used to offer, and go out and get it oneself? Perhaps we shouldn't overreact. Anyway I reached the chapter "Of China, Glass, and Little Things," and learned, or am re-learning, a bit about Josiah Wedgwood, the Portland Vase, and such. 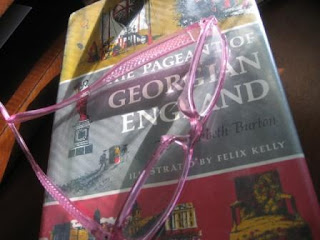 One day I put the book down to run errands. On my list I found "cat food and water bowls," the scribbled reminder there because the old bowls are long since chipped, cracked, and leaky. So I ventured to the local thrift store, where one may find interesting old dishes for just such a purpose. I browsed, chose, and brought home a few. Shouldn't the cats nibble and drink only from nice things? 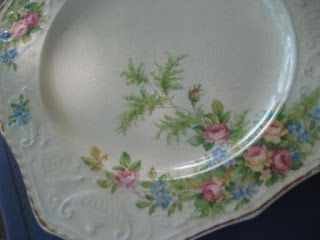 But the more I admired my thrift store finds, the more I thought, "these will look better displayed in some bright spot, than they will on the kitchen floor, holding kibble." I determined to give the cats two or three of our own plain soup bowls for their meals, and reserve my new flowery plates for me.

Looking about for a place to show these -- now mentally dignified as "china" -- realization dawned. I actually own rather a lot of old, thrift store and antique shop china. Looking about, I see seven or eight plates, a few bowls, a few teacups. My small collection even boasts one gem, a beautiful gold-rimmed plate painted in orange roses, on the back of which you may actually read the word "Limoges." Is it real? You can see the light through it. Perhaps it is.

Thus it became necessary, one thing leading to another, to learn more about china and porcelain than The Pageant of Georgian England tells me. It became necessary to start almost any old where.

(Before we leave the Pageant we must indulge in an aside. It is extraordinary, the information old books will give you. In what modern work, written not by some humble Elizabeth Burton but by great and respected Ph.Ds, will we learn for example anything of the Woodchester Pavement? This is a glorious, million-and-a-half-piece ancient mosaic from Roman Britain, discovered under a churchyard by a gentleman archaeology enthusiast in 1793. Georgian England, you observe. It was once a part of some wealthy family's villa circa 300 A.D., and depicts "Orpheus charming the animals." For some strange reason, the pavement cannot be exposed to public view permanently. Apparently it causes too much fuss, or would deteriorate, or both. Every few decades it is dug up and shown off. Miss Burton catalogs half a dozen "undiggings" up to 1965. The last time it was shown, in 1973, a hundred and forty thousand people descended on Woodchester to see it. "The village could not cope," records the online paper This is Bristol on January 19, 2010. It is "unlikely the pavement will ever be seen again." Because of forebodings on just this score, a pair of brothers named Woodward had taken it upon themselves to create a glorious, million-and-a-half-piece replica of the Pavement in the 1970s; but as of the publication of This is Bristol's article two years ago, that replica too was in danger of being lost. It essentially lived in a rented space, and the landlord chose not to renew its lease. This Is Bristol gives us no further updates. Which leaves us to ponder ... why leave a precious historic and artistic relic buried ... because exposure attracts visitors and risks damage to it ... which might render it... um, unviewable? Is there no technology or method whatever to solve this problem?)

Still. We were discussing china and porcelain. What more natural, in pursuit of this new hobby, than to go to the Kindle store and download, almost at random, The Story of Porcelain, written by Sara Ware Bassett in 1919? (It's free!) The book is for children, that is to say, for the very unusual children who would have been mentally equipped to read about porcelain for fun in 1919. But how to capture even their attention? Sara Ware Bassett chooses to tell a story about a young boy and his father and his father's friend, all on a Maine fishing trip gone wrong. The boy, Theo, misbehaves and accidentally breaks his leg in the wilderness. Luckily the father is a doctor who can set the bone himself, no joke in a world before ambulance-helicopters, cell phones, antibiotics, etc.; equally luckily, the friend, Mr. Croyden, is a porcelain expert and factory owner who proceeds to entertain the invalid with long lectures on the subject. The porcelain parts of the book are truly so interesting that one wonders why the authoress felt obliged to frame them in the fishing story after all. Far from the fishing being needed to enliven the history, one can imagine the history ruining the fishing for boy readers of the time who thought to pick up an adventure tale. Besides, in our cynical and downright foul-minded era, not only is this frame unintentionally hilarious, like so --

After dragging a steamer chair up to Theo's bedside and stretching himself comfortably in it the elder man began:
"Most of the pottery of the seventeenth century was an outgrowth of the Italian Renaissance ...."

Nevertheless, with Sara Ware Bassett we are in most capable hands. This is not, as they say, her first rodeo. Wikipedia tells us she also wrote "The Story of" books about Lumber, Wool, Leather, Glass, and Sugar. Then followed Paul and the Printing Press, Steve and the Steam Engine, Ted and the Telephone, Walter and the Wireless, and Carl and the Cotton Gin.  If her research on all these subjects was half as thorough as it was on porcelain, then she has done quite enough to impress me, an utter tyro. From this Story so far I take away two basic ideas: that until mankind learned to craft good pottery, a lot of foodstuffs leaked or evaporated maddeningly out of plain clay jugs and jars; and that there is a difference between glazed pottery and what Theo speedily learns to call hard paste or "true" porcelain. This is made of kaolin, a certain type of clay first found, used, and named by the Chinese, kept a secret by them, and much hungered after by Europeans who for ages could not figure out what made the best Chinese ceramics so white, so delicate, so beautiful, and as breakables go, so durable. Hint: therein lies the difference between the two wares. Break glazed earthenware, and you see and feel the rough gray clay beneath the glaze. Break porcelain, and you see porcelain, fired kaolin, all the way through.

There. We are underway with our new hobby. Madeleine Kamman was right. It is probable that, even after we put away our World War I-era children's book on the subject, one thing will go on leading to another. 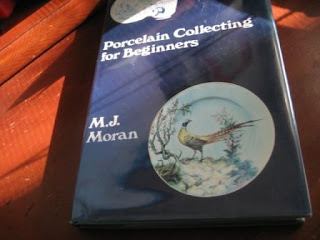 The cats seem satisfied with their new-ish bowls. And isn't it all pretty? 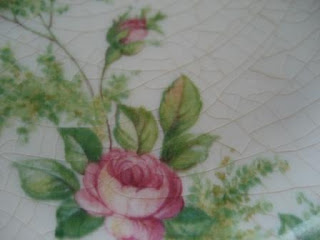