We began our butter making here. 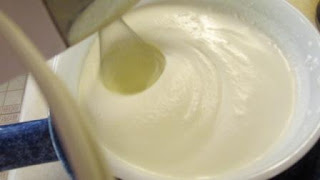 It was all a part of the marvelous three-day weekend, which included the zoo and the conservatory, the fish and the orchids. Did I mention buying my post-Christmas treat, the little bottle of Chanel No. 5, on the Saturday? Show me a gift card from Macy's, and stand back. The more I wear it, the more its warm, rich fragrance (can it be reminiscent of a sort of fruit, and maybe allspice?) seems to grow on me. There's a story at Wikipedia about how the perfumer who presented his creation to Coco Chanel in the 1920s was trying to capture not only jasmine and rose but the "Arctic freshness" he had known while stationed in northernmost Russia interrogating Bolshevik prisoners in the days of the Russian Revolution. That sounds like tremendous hooey to me -- marketing with a capital M. But the scent is lovely. Certain People in my family claimed it reminded them of mosquito repellent and baby powder, but that can't be. Chanel No. 19 is said to be even more wondrous ... we must look about

Anyway, in the midst of all this activity came my first experiment in homemade, cultured butter. We wanted good butter to go with our challah to go with our weekend. An old post of David Leibowitz's got me started. In his list of amusing and useful links re: "real" butter, he includes The Traveler's Lunchbox, whose instructions on the making thereof are very thorough. The Traveler, in turn, credits "fellow blogger Dominic" of The Zen Kitchen for teaching him the art. Alas, after nearly six years the link to that particular post has been lost in the ethernet. It's understandable. The Cloud can't hold everything for all time.

Still. We carry on with what we do know. To make French or cultured butter, you cut the Traveler's recipe in half, and obtain --

Combine the cream and yogurt. Let the mixture sit, loosely covered at a warm room temperature (ideally about 70 to 75 F), for 12 to 18 hours, until it thickens. My cream developed a sort of skin on top, but that seemed to do no harm. If the cream "bubbles or turns gassy," discard it and start again. "Note that this has never happened to me," writes The Traveler's Lunchbox. It didn't happen to me either.

When ready to make butter, chill the cream down from room temperature to about 60 degrees F. This is not a big change. Placing the bowl in the refrigerator for a few minutes should be enough to effect it. Then, whip the cream with an electric beater, until it -- the cream, not the beater -- "breaks." This means that after forming beautiful, dessert-worthy whipped cream it will churn up into a glop of small soft yellowy beads, and will instantly exude a thin white liquid that pools at the bottom of the bowl. Stop whipping at this point, or the liquid will fly all over the kitchen. This liquid is buttermilk. 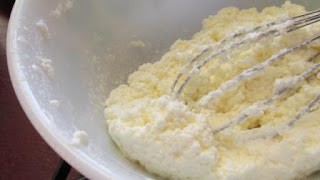 Pour off the buttermilk into a clean cup -- in the picture above, it has already been done, so you don't see a pool -- and reserve that in the fridge for another use. A number of chocolate cake recipes happen to call for just a cup of buttermilk, so you might explore that possibility.

Now it is necessary to wash your fresh butter.  Pour some ice water, which you have ready to hand in a clean bowl, into the bowl of drained butter. Work and knead it with a fork, and pour off the resulting cloudy water. (The point of washing butter is to remove any remaining buttermilk residues, the presence of which could quickly turn the butter rancid.) Keep on adding ice water, mashing all with a fork, pouring off the clouded water, and then adding fresh water and mashing again. You have finished washing when the water pours off almost completely clear. The cold water, of course, also helps solidify the butter. 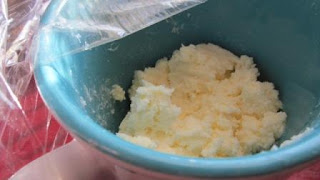 If you wish to salt your butter, do so now, to taste. With practice your imagination may run wild here, and lead you off into the fragrant realms -- all rolling grassy hills, sunny valleys, and cows grazing peacefully in the rising mists of a summer dawn -- of flavored butters. Why salt only? Why not garlic, or lemon, or  pepper, or clove, why not rum or thyme or vanilla?

All that lies in our future. Now, having salted carefully -- why, we have finished. Our "French" or "cultured" butter is ready to pack into any receptacle, whether a cup, ramekin, specially designed butter mold or what have you. Cover it or wrap it tightly before refrigerating it, as it will readily absorb foreign odors.

And what was the point of it all, besides having fun and learning a new kitchen skill, and savoring something delicious to spread on challah at a winter picnic? The point was to try to recreate what butter used to taste like when it was made on the farm, before pasteurized cream and industrial production made the indispensable yellow sticks cheap, hygienic, plentiful, and bland. Centuries ago, the farm wife skimmed off the cream from her milk over several days, collecting it until she had enough to churn into butter. While it held in pans or pails, benign lactic acid bacteria accosted it, souring it slightly. When the farm wife churned this cultured cream, the result was butter with a savory tang unknown in what we buy today. Harold McGee in On Food and Cooking writes, "Continental Europe still prefers the flavor of this lightly fermented 'cultured' butter to the 'sweet cream' butter made common in the 19th century by the use of ice, the development of refrigeration, and the mechanical cream separator" (p. 33). This explains why we must stumble upon recipes for homemade cultured butter in the blogs of Britons like the Traveler, or Paris-based expatriates like David Leibowitz, who have tasted both and like the one much better.