Sunday seems the right time to indulge ourselves with a treat. Most lasagne recipes are a bit fussy -- when I was growing up, lasagne was always a huge deal, as a matter of fact usually reserved for Sundays, because it was judged to involve such an extraordinary amount of work -- and this one is fussy too. It redeems itself, in my opinion, by being meatless. I have no objection to meat. But the ground beef in lasagne always seems to me to turn the dish heavy, dry, and thick. My recipe, put together from many sources over the years, is entirely vegetarian and simply luscious. You will want any nice wine at all with this, red or white, dry or sweet or -- why not? -- bubbly.

Start by bringing a big pot of water to a boil. Salt it and drop in your ten lasagne noodles to cook. (I have no truck with no-boil noodles. I just don't.)

While the noodles cook, melt some olive oil and butter in a large heavy saucepan -- about 1/2 cup of fat in all. When it is hot, sauté a combination of vegetables in it, beginning with a diced onion and progressing on to chopped carrots and chopped zucchini, and of course a clove or two of diced garlic. Add about 1/4 cup of white wine to the vegetables, and let them simmer and soften for about ten minutes. Add fresh herbs, like thyme or tarragon, plus about 1/2 tsp salt. 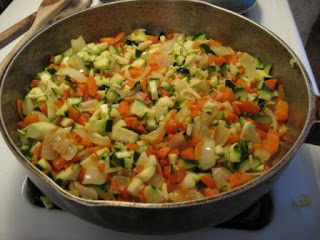 In a separate saucepan, sauté fresh mushrooms in butter until they also soften. Certainly you may simply cook the mushrooms with the rest of the vegetables, but sometimes I like to keep them a separate layer in the finished dish. Besides, if you take care not to crowd them -- which in the photo below, you notice I did not do, alas -- they will brown and give you a different flavor. 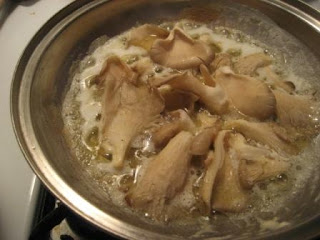 When the vegetables in the first saucepan are very soft, add a 10 ounce package of fresh washed spinach to them, cover the pan, and let the spinach wilt. Along about this time, the noodles will be done and you will drain them and toss them with a bit of olive oil so they don't stick to each other. 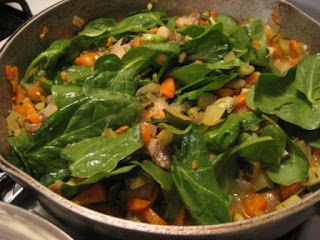 Upon which, you are almost ready to assemble everything. Have ready, not only the cooked drained noodles and the two pans of vegetables, but also some grated mozzarella cheese -- about 1 and 1/2 cups -- and four or five fresh sliced tomatoes. You will also have made a simple white sauce by now. Did I mention this?


Melt the butter in a small saucepan, and when it froths a bit, add the flour and stir and cook for a few minutes. Pour in 2 cups of milk, and stir and cook until hot and smooth. Add salt and pepper, and maybe nutmeg, to taste.

Now you are ready to make dinner, really. Preheat the oven to 325 F. Lightly grease a 9 x 13 x 2 glass baking dish with olive oil. Layer into the dish, first, three noodles; then some spoonfuls of the vegetable mix along with its juices and the mushrooms and their juices; then, a handful of the cheese; and then, a few slices of fresh tomato. 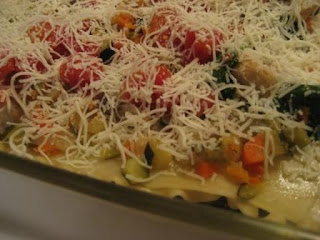 Continue making layers of noodles, vegetables, mushrooms, cheese, and fresh tomato. When you have finished with a last layer of noodles, pour the cream sauce over. 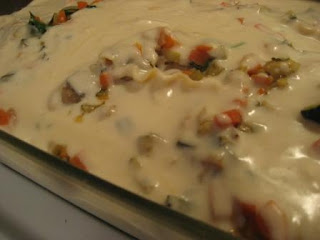 Layer on the last of the fresh tomatoes, dust the top with a bit more of the mozzarella cheese -- or some Parmesan perhaps? -- drape the pan with tin foil, and pop it in the oven for about 25 to 30 minutes. When it is fully bubbling and delicious, take it out and let it sit for ten minutes to firm up before you ring the gong.

The beauty of this meal is that while you eat you can also regale the family with a short history of lasagne. It seems to be an ancient concoction. The Oxford Companion to Food, no less, tells us that the Greeks and Romans ate simple flat cakes or fried squares of dough called laganon or lagani, which were probably added to peasant stews to give them bulk, as dumplings would eke out a meat stew. However, our more modern definitions of lasagne as both the flat pasta sheets and the dish made of them, layered among meats, vegetables, or sauces, may already have been known in medieval Italy. The Companion explains, "Marco Polo, recounting his travels in the Orient, said that he ate in Fanfur [a] 'lasagne' made with flour of the breadfruit, implying clearly that he was already familiar with lasagne [the noodles] made of ordinary flour."

In his massive, italics-laden, Cookbook-of-the-Year-Award-winning A Mediterranean Feast, Clifford Wright goes deeper into the history of lasagne than even the nice people at Oxford do. He is anxious to thrash out not merely what lagani would have been, but exactly what are the differences among pasta, and pasta secca (dried pasta), and macaroni and true macaroni (made from pasta secca), and which pastas were first recorded as made from what wheats, hard, soft, or otherwise. We readers gape at his knowledge. We salute him for investigating references to pasta in classical authors of incredible obscurity ("the Greek use of the word lasanon [sic?]appears in Hesychius to mean a kind of foccaccia made of wheat and oil"), and for finding out that the Chinese traveler Chau Ju-Kua, circa 1150, was startled by the long shelf life of (hard) wheat in Muslim Spain -- "this would hardly be notable if the Chinese knew of hard wheat." Bravo, Mr. Wright. However, if as a reader or a cook you have any experience of A Mediterranean Feast, before you are half-finished accompanying him through his long journey into the subject of all things lagani you will nod sagely and say to yourself, "I know where this is going. 'The Arabs invented it.' "

Skim ahead to the next paragraph break. We are on page 622. "The origin of macaroni lies not with the Etruscans, Greeks, Romans, or Chinese, but apparently with the Arabs." This may be entirely true, but Clifford Wright is paradoxically the last person I would trust to give this information. A Mediterranean Feast is the most weirdly politically charged cookbook I have ever owned. It's only human nature to boast about the things we love, only human nature to happen to find out that whatever subject or group of people most fascinate us are secretly the foundation stone of the universe. But really. Are we to believe that Europeans were so stupid they did not know enough to grow crops in summer until the Arabs taught them to do so (p. 22)? And, amid his recipes and his history, need a cookbook author scold his readers not to criticize the wearing of the Muslim veil ("this is not to be judged in terms of women's rights")?

It may be that Mr. Wright has relaxed a bit in the ten years since A Mediterranean Feast was published -- though to judge from the sample lecture titles offered on his website today, perhaps not. We may be better served by consulting his long list of links to very interesting food and culinary history websites. In any case, do enjoy my creamy vegetable lasagne. If the family want to talk about less inflammatory things during dinner, by all means let them.