I stopped listening to the radio in 1979 because it got so dull forever waiting for the station(s) to play a song I liked. There was a lot of dreck being broadcast and listened to and paid for in 1979. Supertramp's "Logical Song," Raydio's "You Can't Change That," Melissa Manchester's "Don't Cry Out Loud," and Billy Joel's "Big Shot" epitomize the dullness. Most of it seemed so harsh and clanging, too. Then there was Herb Alpert's "Rise," which was neither harsh nor clanging, but of which the less said the better. I tried a country music station for a while, decided I only liked T. G. Sheppard's "Last Cheater's Waltz" and Charley Pride's "Mountain of Love," and then turned off the machine entirely. Later on I enjoyed, in my reading, coming across appropriately quaint old terms for the baleful, boring instrument. In Anne Frank's Diary, it was a "crystal set." In Mapp and Lucia, it was "the wireless," and to turn it on "Olga turned a handle or a screw or something." E. F. Benson was no more interested in it than myself, it seems. Some other English novel called it, very properly, "a "listening-in device."

Thanks to that self-imposed artistic fast, all popular music produced after 1979 strikes me as the new stuff the young folks are crazy for now.


Leap forward thirty-four years. (Is it really?) Self-imposed fast or no, since I work in a retail store run by young management, I am all of a sudden exposed to a steady diet of reasonably au courant music. Judging by my children's reactions, I am hearing what is new and hip beginning about six months after it is truly hip. Such that when the nice salesman, all unknowing, gives me a sample of a new wine called Drops of Jupiter, and asks if I am familiar with the band Train (no), and the song "Save Me San Francisco" (ah-hah), I can take the wine home, taste it, and look up the odd title.Then I can discover, via a Huffington Post article from 2011, the video on YouTube of Train performing "Drops of Jupiter." Why yes, I have heard that at the store, it must be au courant! Alas, no. Copyright 1998.

Below are some drops of rain on the evergreen tree beside my back porch. 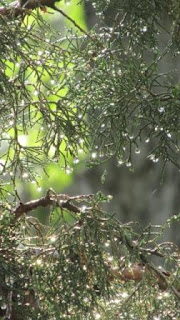 The song "Drops of Jupiter" is pleasant enough. I do enjoy lyrics that are simply pretty images, with no meaning or connection to one another, as in."she walks like spring and talks like June" or whatever it was. There's a certain brazen charm in young artists putting this sort of thing to a melody, adding a few bits that seem like emotional truths, and catching people's attention and earning money by it. And generations of them have been doing this for, what, seventy years? "Roman cavalry choirs are singing" (how does anyone know?), Rhiannon "rules her life like a fine skylark." Warden threw a party at the county jail. At least that was a whole sentence, and the beginning of a complete story.

Because you see I do hope that over the decades, the artistic brazenness and the unconnected imagery haven't always just come from drug use. Surfing YouTube beyond Drops of Jupiter, one encounters the seeds of doubt about that. Watch Stevie Nicks belt out "Rhiannon" live in 1976, for example. (The commenters below the post "love how she loses it at the end.") Impossible to deny that in the '70s every red blooded teen girl in America wanted to be Stevie Nicks -- the hair, the chin, the eyes, the voice, the body, the name "Stevie" in a world of Lindas, Pams, and Kathys -- but we wanted to be her minus the cocaine habit, surely. I hope that is just as true for all the boys who wanted to be whatever rock stars they admired.

Below, the clouds that made the rain. 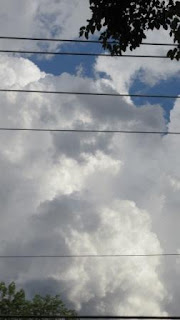 And below that, the "supermoon" that everybody else photographed last week.


As it happens Drops of Jupiter, the wine, is good.. It is another global red, retailing for about $9. Hey - hey - he -- ey -- ey -- eyyy.  All this time we haven't even asked why a rock band would venture into wine sales. Perhaps they have been told everybody's doing it and it's a better investment than precious metals or hog futures. And yes, customers do buy a wine sight unseen when it is sponsored by a musician -- much moreso than they will when it is sponsored by an athlete. The Dave Matthews Band does it; Lady Gaga did it. Can we expect a Fleetwood Mac chardonnay soon, or a Coldplay chianti? If not, why not?

And do you think  -- can you taai-aiil me if -- I could try my hand at the unconnected-imagery wheeze, and write a rock and roll song? If this one makes me a fortune, I'll let you know.

Some drops of rain on the evergreen tree
Beside my back porch
There's a certain brazen charm
Seeds of doubt
The hair, the chin, the eyes,
The voice, the body, the name
"Stevie" in a world of Lindas, Pams, and Kathys
The clouds that made the rain.
The "supermoon" that everybody else photographed last week.