One or two disappointments in the last several days prompted me to look among my bottles for something good. The disappointments were not necessarily bad wines, just wines that were, perhaps, a tad too old, or not quite to my taste. They were white wines, both of them, and they reminded me of buttery pastry and some lettuces and pears and mustard and all sorts of odd harsh things I wouldn't care to drink again -- which is why my rummaging about in my collection for something "good" now meant something red.

And here it is. Another treat, and an interesting one, from our ancient friends at Mazzei: 2003 Belguardo Serrata Maremma Toscana I.G.T. It's 65% sangiovese, 30% cabernet, 5% merlot. You'll recognize the sangiovese, and the Italian-ness, in the taste of raspberries in olive brine, of a little meat, a little smoke, a little leather, some chocolate and a whiff of licorice (that's oak barrel aging, I believe). All this plus the bright acidity and finishing tannins will make you want to plan some sort of meaty dinner to accompany it. Grilled steak pops into mind, but then grilled steak pops into my mind lots of times.

"Belguardo Serrata Maremma Toscana" is, pardon the pun, quite a mouthful. Like the same producers' Poggio alla Badiola, the wine is essentially saying, "I am not a Chianti." In this case, Belguardo is the estate (purchased by Mazzei in the 1990s), Maremma the area within Toscana (Tuscany). "Serrata," it seems, is a sort of artisanal descriptor intended to signify that Mazzei presents these wines as the best exemplars of the Marema territory. Other vintages of Belguardo Serrata have been mixed of sangiovese, cabernet, and merlot in slightly different proportions; beginning in 2005, sangiovese has been combined with alicante nero. This latter grape appears to be the same as alicante bouschet, first developed in the 1860s in France by M. Louis Bouschet de Bernard. Its claim to fame is its vividly colored red flesh, used to give good color to otherwise pale wines -- "by itself, Alicante Bouschet produces wines that are decidedly unexciting," warns The New Wine Lover's Companion. Perhaps, for a winemaker, blending in some alicante to a sangiovese is a way to plump up the non-chianti, while saving the estate's merlot and cabernet for other purposes. 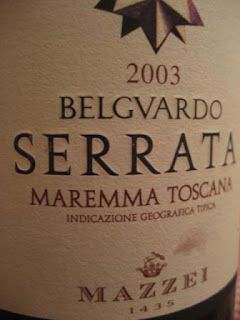