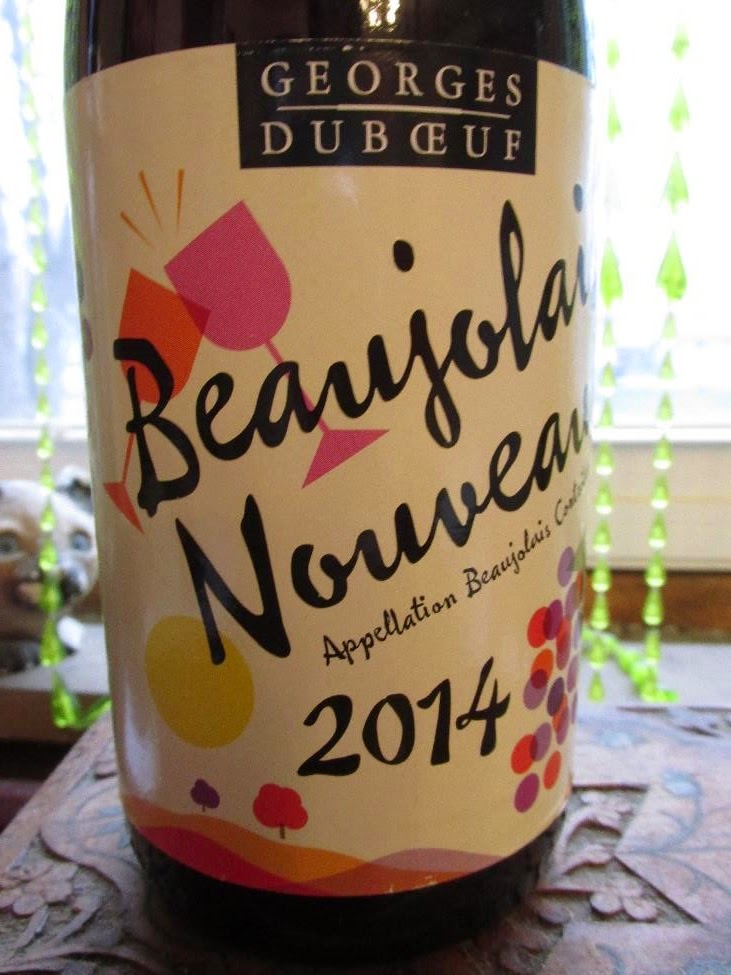 Beaujolais is made from "gamay the gulpable," as Jancis Robinson called the grape in her small book Grapes and Wines. Gulpable it is, and by that we mean fresh, full, and simple, exactly as if plain grape juice had a slightly older cousin who had been, not quite around the block a few times, but had perhaps dashed across the street on a dare, once. There is absolutely no trace in a Beaujolais Nouveau of the adulthood other wines show. No tannins, no acids, no hints of vanilla or leatheriness, no earth or figs. Just juice. Drink it up on the night of Thanksgiving, my fatheads, because in my opinion delightful and easy going as it is, it will not last even one extra day.

In his small but excellent thumbnail-sketch book, Windows on the World: the Complete Wine Course, Kevin Zraly says that the quality of a Beaujolais Nouveau in any year can predict the quality of other Beaujolais from that same vintage. The various producers are in less of a hurry about those, releasing them the following spring. These additional Beaujolais types come from better (but still gamay) grapes grown in villages "which consistently produce better wines." Note that the producers can remain the same. And producers are not the same as villages. To talk about better Beaujolais than the Nouveaus of Thanksgiving is not to slur, for example, Georges Duboeuf, producer, whose Nouveau is pictured above.

Do we agree that a sample of a Nouveau predicts what's coming? Perhaps we should try to clear up a few small matters first. We are after all in Burgundy, where the vineyards have been so carefully tended and mapped for a thousand years that they outrank their owners; everybody jealously jostles to own and manage a few rows of vines in this celestial vineyard or that, or near this renowned village or other. In the Beaujolais subregion of Burgundy, the delineations are fairly simple. Three quality levels stand above the "Nouveau" of the bright flashy labels and November's "c'est arrivé!" excitement. In ascending order, there is "basic" Beaujolais made of gamay grown anywhere in the region; there is Beaujolais-Villages, blended from grapes of some of the 35 villages which consistently put out better wines; and there is Cru Beaujolais, made from grapes of 10 specific villages only. These villages -- and I still say French village and sometimes grape names provide an endlessly delightful resource for anyone puzzling over what to name a cat -- are Brouilly, Chénas, Chiroubles, Côte de Brouilly, Fleurie, Juliénas, Morgon, Moulin-à-Vent, Régnié, and Saint-Amour.  The village names will appear on the label of a Cru Beaujolais. And lots of different producers, jealously jostling, can make their versions of the various Beaujolais Villages or Cru Beaujolais, depending on what parcels of what vineyards they own. You can find, for example, a Georges Duboeuf "Morgon." More serious wine, as Beaujolais goes, far less flashy label. Or you can find something like this. 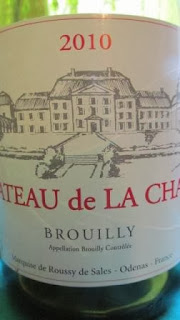 Now about the harvest, and vintage quality predictors and so on. Note that this Chateau de La Chaize Brouilly carries a vintage date of 2010. Might it taste good today? From Kevin Zraly we can infer, yes, most likely a Cru Beaujolais four years old is just about ripe for opening. He says Beaujolais and Beaujolais-Villages are meant to age perhaps one to three years. Crus longer, but not much beyond ten years. Four seems perfect. In fact, according to the useful website Beaujolais and Beyond, the 2010 vintage was good: "Much celebrated, a Beaujolais lover's vintage and a triumph of winemaking after adverse weather conditions." So our Chateau de La Chaize is right on time.

As for 2014, Beaujolais and Beyond says -- based on Nouveau samplings, or merely on weather records? -- the year looks promising. Though I am a bit perturbed by the wine's utter loss of flavor the next day (well, maybe that's normal), I kind of think so, too.

Beaujolais Nouveau, retail, about $9. Beaujolais Villages, about  $12. Cru Beaujolais, about $14.