Every autumn and holiday season, I vow that I will cook chestnuts this year. I forget why I ever got the idea. Somehow I recall reading a French cookbook, which enthused about chestnuts and made them seem glamorous and wonderful. This year became the year, because I read a post at An Obsession with Food and Wine which dropped broad hints that chestnuts are a pain in the neck. I thought, aha! If a professional has difficulties with them, then I perversely have the courage to try them. So I bought a small bag from the grocery store, brought them home, consulted my cooking bible, Marion Cunningham's Fannie Farmer Cookbook, and set to.

Chestnut instructions always begin with the cutting of a slit or cross on the flat side of the nut. 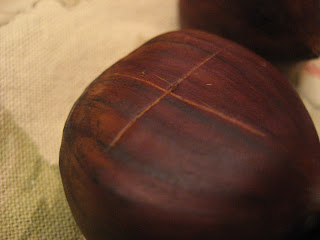 Then, we drop them into boiling water "for a minute or two." Voila -- they do come out with the shell and skin looking ready to peel. 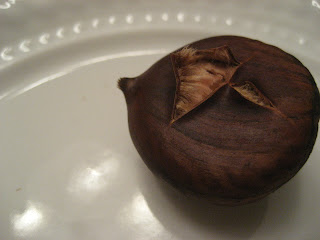 Then, we peel them. The inner skin is not papery like the skin of a garlic clove, but gluey and rather thick. It also adheres to the wrinkles and bumps of the nut meat. The nuts grow more difficult to peel as they cool, which is why the cookbook recommends another dip in boiling water for the stubborn ones. 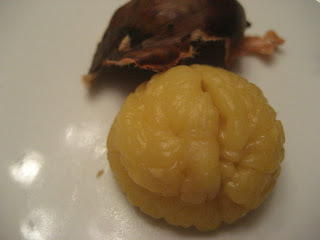 My first chestnut came out beautifully. It looks exactly like a little brain, which makes me wonder why chestnuts aren't a bigger deal for Halloween snacking fun. 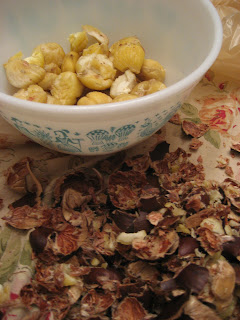 It took two of us about fifty minutes to peel about a pound or so of chestnuts. I begin to think there is something sensible in the old song's instructions to roast them on an open fire. And none of them emerged as pristine as the first. Perhaps it would be best to host a chestnut-peeling bee whenever you feel the urge to include these in your holiday menu, so that a dozen people can make headway against the little brains while they are still hot.

The next day, I simmered them in a cup of chicken broth, 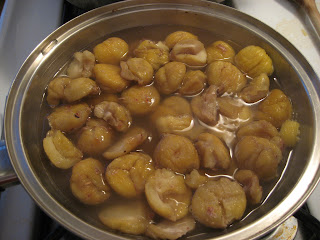 as the cookbook recipe directed (although it did specify beef broth, which I did not have), and then after 20 minutes, added 2 tablespoons butter and some salt and pepper. All might have been well, but in the final five-minute rush of getting Thanksgiving dinner on the table, I kind of forgot about the chestnuts. They overcooked and turned a tad mushy, and did not look appetizing enough to photograph.

Their flavor was mild, smoky, and unremarkable considering all the effort of preparing them. Needless to say they were far too dry, as dry as a mouthful of unbaked pastry dough -- in fact, to combine them on a fork with cranberry sauce was to create an effect just like pie. Perhaps a new pie crust idea for those with gluten problems?

Derrick at OFW endured Chestnut-aux-pain in the neck and then paired his particular recipe with a wine called a vin jaune ("yellow wine") from the Arbois appellation of the Jura region in eastern France: a 1997 Stephane Tissot, to be exact. This is a wine made from a local native grape, the white Savagnin. The wine sits in a half-full barrel for six years under a coat of natural yeast scum, "during which time" (says Oz Clarke in the New Encyclopedia of French Wines) "it oxidizes, develops a totally arresting damp sourness like the dark reek of old floorboards, and yet also keeps a full fruit, albeit somewhat decayed."

How I do admire professionals, and all they know. We enjoyed our Thanksgiving dinner, complete with Chestnut Meh, with a standby grocery store riesling that I (ridiculously) decanted because the decanter is pretty. Good times.
at November 23, 2014