Gourmet's Cider-braised pork shoulder with caramelized onions, plus how we're all descended from royalty

My fatheads, you must forgive the quality of the picture. Think of it as rustic and homey, somehow.  Medieval ... Norman. 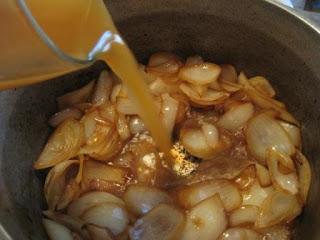 And what on earth do you say to a very kind young man who is interested in ancestry, and thinks he can trace his descent from the earliest American pilgrims, and English and French royalty, and all royalty going back to the Roman Empire? Apart from the glaring fixation -- no one is ever descended from plumbers, or even artists -- I would think a fourth-grade arithmetic class would disabuse any of us, permanently, of the notion that we get to have our own private family tree, which we can then imagine to be leafed out however we like. Ancestors double, you know, with each generation. You have only to go back a little more than a hundred years to find, already, your 32 great-great-great grandparents. Don't you think it's likely that they were also somebody else's great-great-great grandparents? Maybe even your co-workers', or the man in the street? Step back another generation and the number is 64. And so on. Henry Adams in his great book Mont Saint Michel and Chartres (1904) mused on "arithmetical ancestors," because he had computed even further.


Since the generation which followed William to England in 1066, we can reckon twenty-eight or thirty from father to son, and, if you care to figure up the sum, you will find that you had about two hundred and fifty million arithmetical ancestors living in the middle of the eleventh century. The whole population of England and northern France may then have numbered five million [note: Fordham University estimates eight million], but if it were fifty it would not much affect the certainty that, if you have any English blood at all, you have also Norman.

In other words your many-times-great-grandfathers, including the odd, titled roisterer-doisterer who may have visited some humble cottage with a glint in his eye, were your same many-times-great-grandfathers many times over. It's the only way everyone's arithmetical ancestors can fit into population levels of bygone eras. We're all descended from and related to everybody. Far from this news seeming -- to my young royal friend, or to anyone -- therefore disappointing, anonymous and dreary, Adams infuses it with romance:


If we could go back and live again in all our two hundred and fifty million arithmetical ancestors of the eleventh century, we should find ourselves doing many surprising things, but among the rest we should pretty certainly be ploughing most of the fields of the Cotentin and Calvados; going to mass in every parish church in Normandy; rendering military service to every lord, spiritual or temporal, in all this region; and helping to build the Abbey Church at Mont Saint Michel. From the roof of the cathedral of Coutances over yonder, one may look away over the hills and woods, the farms and fields of Normandy, and so familiar, so homelike are they, one can almost take oath that in this, or the other, or in all, one knew life once and has never so fully known it since.

Never so fully known it since!

My gentleman friend listened to all this and told me I should have tweaked the young royal about his math illiteracy -- innumeracy, do we call it now? -- and his idée fixe. I said, no. I think there is no harm in letting someone natter on about a harmless and pleasant fantasy. Perhaps when he is older a fabulous, fiery girl will give him the rough side of her tongue about birth records from the Roman Empire. He will be much amazed, grow up overnight, and will throw himself into a love affair to astonish them both. Then he can read Henry Adams, and find a truer level of mystic romance in anonymous things.

Meanwhile, in honor of the Calvados that Adams mentioned -- the region, not the apple brandy, but we're fine with both -- we'll make this delectable winter dish. Pork shoulder, onions, and apple cider. Gourmet does not call it Norman per se, but our arithmetical Normans would have liked it very much.

Score a crosshatch pattern on the meat and insert the garlic slices into the cuts. (Or, simply toss a couple of whole cloves into the pot later, before putting it into the oven.) Season the pork with salt and pepper. Preheat the oven to 325 F.

Heat the oil or butter in a heavy oven proof pot. Brown the meat on all sides, turning occasionally until it is all browned, about 8 minutes. Transfer to a plate.

Add the onions to the pot and cook, stirring occasionally, until softened and golden. Add 3/4 teaspoon salt and keep cooking until onions are golden and caramelized, about 10 to 15 minutes total.

Stir in the cider -- or, deglaze the pot with a few Tablespoons of Calvados, stir, and then add the cider. Return pork to the pot. Cover with aluminum foil and the lid, and put into the preheated oven. Bake about 2 and 1/2 to 3 hours. When the pork is tender, transfer it to a clean plate and boil the sauce to reduce it to about 2 cups.


What wine to serve with this? In her chapter on Norman food in When French Women Cook, Madeleine Kamman often suggests dry ciders to accompany the recipes, including of course those featuring pork and butter. We forget, if we ever considered it before, that on a map of the wine regions of France, Normandy is not set off and color-coded at all. This is a land not of grapes but of apples and dairy cows, of Calvados and cream. So a cider would be tasty. Or possibly a fully dry or "Trocken" German riesling?

And we'll close with a little more of Mont Saint Michel and Chartres. (It's a book about Gothic cathedrals and stained glass, but also about much more.) Why did Henry Adams, in 1904, think that in medieval Normandy "we knew life, and have never so fully known it since"?

Never so fully known it since! for we of the eleventh century, hard-headed, close-fisted, grasping, shrewd, as we were, and as Normans are still said to be, stood more fully in the centre of the world's movement than our English descendants ever did. We were a part, and a great part, of the Church, of France and of Europe. The Leos and Gregories of the tenth and eleventh centuries leaned on us in their great struggle for reform. Our Duke Richard-Sans-Peur, in 966, turned the old canons out of the Mount in order to bring here the highest influence of the time, the Benedictine monks of Monte Cassino. ... Our activity was not limited to Northern Europe, or even confined by Anjou and Gascony. When we stop at Coutances, we will drive out to Hauteville to see where Tancred came from, whose sons Robert and Roger were conquering Naples and Sicily at the time when the Abbey Church was building on the Mount. Normans were everywhere in 1066, and everywhere in the lead of their age. We were a serious race ....