The one-time, irreproducible, crazy-local gourmet recipe: or, I can do that 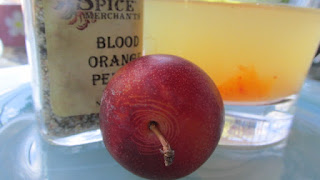 Make no mistake. I like food magazines. But sometimes they are annoying. For every simple recipe for something good, like say "Apricot Clafoutis" (which sounds mysterious but is essentially pancake batter baked in a pie dish and topped with fresh apricots -- Food and Wine, August 2015) they provide six more which look stupendous in color photographs but which the average cook won't reproduce because she is not inclined to rush out to that organic textile/non-GMO bison farm in upstate New York -- or outside Portland or Seattle or Nashville -- where that up-and-coming Manhattan chef spends his summers getting away from it all and thinking up new "small plates" sourced from his twenty-acre experimental locovore garden. I'm talking about, but will likely never make, recipes like Cherry and spring onion salad with Asian fish sauce, Peach, burrata, and pickled pepper salad, Red cabbage and fried Mortadella Okonomiyaki, Ajo bianco with crab and green grapes. We're getting into the July issue here.

We're also talking about a fussy complaint that the editors of Food and Wine could shoot down in a jiffy. If the magazine annoys you, they would say, 1. don't read it, 2. recognize that it's meant for entertainment, and that's why we have test kitchens, 3. recognize that novelty and creativity drive the restaurant business, 4. recognize that this level of novelty and creativity eventually drives new products down to the supermarket level, which is where you shop for foccaccia and Brie, dear (it's the famous "blue sweater scene" from The Devil Wears Prada all over again), 5. recognize that only a day's -- only an hour's experience transforms an ingredient or a technique from something you consider crazy-progressive-stuffed shirt into something you know and like, a la clafoutis; and 6. then go buy Woman's Day. Rock those hamburger casseroles.

But you see the reason I bring up the fussy complaint at all is because I think recently, on a small scale, I cracked the code. I did what the chefs and the food writers do: assemble an unusual, irreproducible food or drink item from a handful of ingredients that I happened to buy all at once but that few other souls are going to have ready in their homes. Voila: food as literary and artistic entertainment. The up and coming chef.

Up and coming mixologist, rather. What I bought all at once, and on vacation at local shops, were just sweet, orange-fleshed "Simka" Japanese plums and a small bottle of Spice & Tea Merchant's Blood Orange pepper. What I had ready at home, as who doesn't, were rum, lemons, and sugar. The professionals who relax on the farm by tossing cherry, onion, and fish sauce salads may laugh at my clumsy dumping together of all this... stuff. But I made a new type of Rum Sour.

Muddle one of the plums in the bottom of a rocks glass. In a cocktail shaker, combine sugar, lemon juice, rum, and pepper. Add ice and shake gently to mix. (Too much shaking anesthetizes flavor, which is why, contrary to James Bond's instructions, you do want to shake and anesthetize the flavorless but powerfully alcoholic vodka martini.) Strain into the rocks glass, garnish with a toothpick stuck with the other peeled plum halves rolled lightly in more pepper.

Incidentally the Spice & Tea Merchants' store reminded me a bit of the WineStyles store where I got my start in the wine industry. It's another franchise, each shop meant to look like a local entrepreneur's idea, each shop laid out the same way -- dark and rustic in this case -- and stocked with the same products. The franchise fee to join and get started on the path to opening your own store is $17,500. My question is, who would imagine that demand for these particular spices and teas is such that a store like this can stay in business more than a few months, anywhere, tourist mecca or not? There was small enough demand for the wine, all those years ago, and chances are if you bother buying a bottle of wine, you will use that up faster than you will use a jar of blood orange pepper. Quaint and interesting, to be sure, but next time I'm on vacation if the store is still there I'll buy something different. There must have been a thousand quaint products on the dark, rustic shelves. They've been open a year. The matter in my jar was solidified, to be fair perhaps because, according to the ingredient list, so much of the "pepper" is sugar. Still. I was the only customer in the store. I wonder when was the last time they needed to place an order for re-supply?

And -- startling thought -- could lack of demand and irreproducible, crazy-local recipes have something to do with the fact that so many of the chefs and mixologists in Food & Wine seem to bounce around so from one awesome gig to another? They are all young and happy and at one with the land, but have resumes as long as rap sheets.
at August 25, 2015