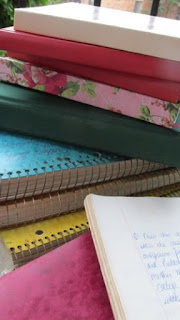 Are you a diary-keeper? O gad. Have you ever gone back and read them? 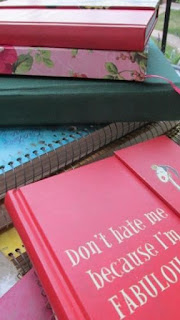 O gad. I can tell you a few things. You were a nicely righteous preteen. "Why didn't God give Hitler a heart attack?" Then, you learned the words bitch and fool, and everybody was one. But you also snapped, and pasted in physical pictures of, your backyard. They have endured and kept their color, folded into a dime store notebook for thirty-five years. 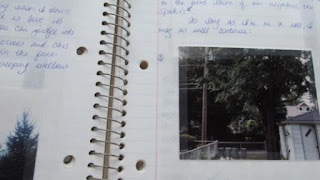 You copied out song lyrics, such that, even now, looking over what seems a bizarre obscure poem will quickly put a long-forgotten melody and a voice and even backing orchestrations right back into your head. Like so.


Later on things got a bit more serious. You gushed gaily in simple French -- et pourquoi? -- when you were in love with your much-too-older community college professor. Of course he hated Ronald Reagan, and liked to refer to the president and his wife as "Ronnie and the Empress Dowager." Such an original mind. Later, you wrote anguishedly in worse French when you didn't want posterity to suspect you had any doubts about true love, or where it lived. You had to consult your high school French dictionary to understand how to write je suis tres, tres, fachee. But, later again, "I'm almost sure I'm pregnant" came in plain English. This was back when home pregnancy test kits were not yet totally reliable.

What's most curious is that, having via all this scribbling purged from your mind whatever you wanted to say about bitches, fools, love, professors or song lyrics, -- when you chance to re-read it, what you chance upon seems to get branded into your mind for good. From time to time you may have had the idea of "going over your old diaries," typing them up for history's sake and for safekeeping. But it's just this fear of what you'll re-find that stops you.

So you might buy an old cedar chest, and put them all in there. You even toss in an old passport, your only one ever. That's what cedar chests are for. 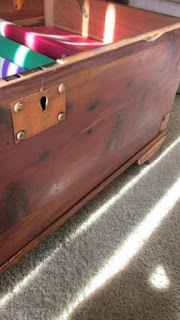