The miserable Lucia started a run of extreme bad luck about this time, of which the adventure or misadventure of the Guru seemed to be the prelude, or perhaps the news of her want of recognition of the August moon, which Georgie had so carefully saluted, may have arrived at that satellite by October. For she had simply 'cut' the August moon ....
E.F. Benson, Queen Lucia (1920)


Strange bits of old knowledge always fascinate, don't they? Writing in 1920, E.F. Benson was still familiar with some sort of folklorish custom in which one "saluted" the August moon. No moon phase is specified, whether new or half or full; no one is saluting the January moon or the harvest moon. August, only. Failure to do so brings bad luck.

I don't know if July's second full moon, the blue moon, counts as part of August's too. Certainly it seemed rude, in a cosmic sense, not to sit out on the patio with a glass of wine and a plate of cheese, and admire "that satellite" as it rose, a gleaming mother-of-pearl gold against pale daylight blue sky, and then turned its usual, sophisticate's brilliant white-on-black. "Like a jewel hung in ghastly night," as Shakespeare said (Sonnet 27). You have seen better pictures of it, but far be it from me to "cut" it in any way. 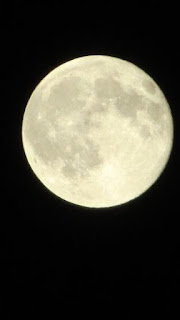 The wine was 2013 Selbach-Oster (the producer) Zeltinger (the town) Himmelreich (the vineyard) riesling (the grape) kabinett (the harvest designation -- first time through the vineyard, to be followed, if the winemaker thought it wise, by 'spatlese' and 'auslese') halbtrocken ("half-dry"). It all means that a riesling's mild, kabinett sweetness was cut not only by the grape's natural acidity but also by a kind of firm, stony core. It's when wines have this that you enjoy drinking something more interesting than grape juice. 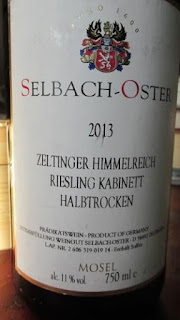 One final thought: I was all set, today, to go on a righteous rant about the Traveler Beer Company's beer, "The Illusive Traveler." I thought, for heaven's sake, modern craft beer is far, far too much in the hands of ignorant young men who still think, for example, that the raised-fist "Revolution" theme is cool (umm, hint: you won --  your glorious President is now going to outlaw coal -- "revolution" now means dissent against you), and who don't know grammar. "Illusive" Traveler? Dear things -- my fatheads -- do you mean elusive -- to elude, to be hard to find? Do you mean a traveler who isn't there, hence illusionary? Do you mean a traveler whose courage and adventurousness are to be copied, and is therefore illustrative?

Driven by an unquenchable thirst for discovery, the Illusive Traveler often disappears for weeks at a time without telling a soul of his destinations. Not friends. Not family. No one. And each time he returns, he unveils new, wonderfully refreshing beers with great aplomb.

When pressed to reveal his travels, I.T. changes the subject or dodges the question by refilling the inquisitor’s pint glass with his latest recipe ....


I was fully ready to believe that a major company had created a product and done all the marketing and gotten the product on the shelves, all the while a glaring, end-of-civilizational error had escaped everybody's (that is, all the young men's) notice. But -- in fairness to myself, as Georgie would say -- and in fairness to all, I did my research first. Perhaps my salute of the moon protected me, or perhaps I was just well-trained by seventh-grade English composition teachers.

I opened the dictionary. It turns out there is such a word as "illusive," Adj.: illusory, unreal.

There. No rant. When I am wrong, I own it, as Lucia very nobly would say. This doesn't mean civilization isn't ending, for one wonders how it can exist without coal, or with a glorious President who loathes the thing itself. But at any rate we know that the young men in beer marketing departments still use dictionaries. I can't believe they knew the word for its own sake.
at August 03, 2015