(Reinventing the wheel of) virtue

Years ago I read a biography of a lady named Lucretia Mott (Valiant Friend, by Margaret Hope Bacon), a once-fairly-well-known 19th century abolitionist and, I suppose we could call her, feminist. She was a Quaker, and so still used "thee and thou" in her speech. Or at least the book quoted her as doing. I once wanted to become a Quaker just so I could say thee and thou.

The final line of the biography urged us all to look out at the world and its problems, and to remember that though she came from sunny, peaceful, ocean-washed 1790s Nantucket, Lucretia Mott, too, looked out at a world full of problems. Slavery in the American South was, for her, the main one. Her reaction, which we must take to heart her biographer said, was, and ever would have been, a brisk "Well, what is thee doing about it?"

Only 'what is thee doing about it' is, you might say, a two-edged sword. If you have an issue you want to do something about, you want to see results for your work. Maybe all the really big issues are gone. (Maybe they have to be: as Calvin Coolidge put it: if all men are created equal, and endowed their rights by God, that is final. If governments derive their just powers from the consent of the governed, that is final.)  All too often it seems the do-gooders' collective work now results in individual tragedy. Yet they still think they're Mott-esque. They never seem to want to be Coolidgian. You're appalled at shootings, let's say -- you insist on gun-free zones -- paste little no-gun decals on the windows of stores and public buildings. And naval training bases. What does the decal really say? "We're unprotected on principle. Do as you will." You walk away from the window feeling good about making a difference in the world. Somebody else gets killed.

All along perhaps the answer to the world's problems has lain, mostly, simply in the individual's behaving virtuously, having been trained in virtue by his  mother and father since infancy, and their mothers and fathers before them. "Thou shalt not murder."

Just imagine: personal virtue as the final thing that matters. Talk about re-inventing the wheel.

The wine is Proximo by Marques de Riscal, a quite good $8.99 Rioja from the ancient producers of very fine $19.99 Riojas. Lately I have a yen for Rioja. I enjoy its simple, silky wholeness. No fruit basket metaphors, no vanilla and cream. It's a wine for grown-ups. Just wine. 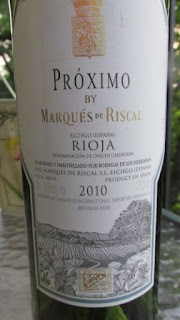