Hoarder or historian? You be the judge. 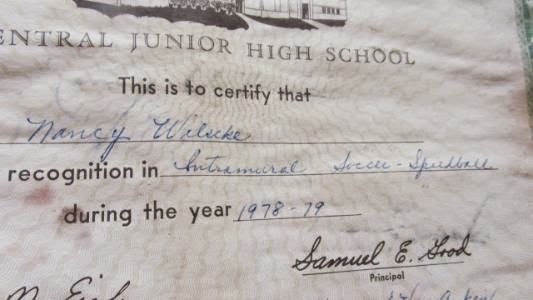 It's a certificate of recognition -- the feel-good, self-esteem, moral relativism hippies were already in charge of education in 1978 -- in Intramural Soccer-Speedball for the school year 1978-1979. Note it's just recognition "in" the sport. Nothing about performance. Maybe I stank. I don't even remember what Speedball was. I was just finishing the eighth grade.  On to high school in the fall.

I saved this thing, and a great many others like it, for God knows what reasons. I liked being fourteen maybe, and wanted to go on being, even in imagination. Maybe I'm a hoarder. My sister says I am.

Or maybe I have always been a historian, and this is history. This is a primary source document, proof of any number of facts: that this junior high school existed, that these types of "awards" were given, that these sports were played and that girls played them, that the principal's name was Sam Good, that this penmanship was in vogue and that Hindu-Arabic numerals were still in use. We even can know that this sort of paper and this ink was used.

People who don't like the discipline of history dismiss history books by scoffing that "historians lie."  They "pick and choose" what they want to write about, they have "bias." That is not the point. History -- and little children used to be taught this, before the hippies took over -- is human activity documented by writing. Where there is no writing, where there are only pottery shards or royal tombs filled with gold, there is pre-history. Uncertainty; no proof. We can only guess about the royals' sports then, or their end-of-term school awards ceremonies. Not to mention the peasantry, who are equally important. Note the little frisson of anguish. We want to know, -- because human beings' lives are worth chronicling truthfully. It is more important than gold. Maybe that's what "made in the image of God" means. And with even this humble little piece of paper, we know, even something tiny and stupid. Knowledge of human history is a small miracle.

Because it's a miracle that junky little written proofs of anything survive to begin with. The peasantry are the most likely to throw out their paper stuff, or to have none. When cities and palaces save this kind of crap in their archives, five hundred years later historians have proof to walk among, not just the "diaries and letters" which we used to be taught are primary (and that never made any sense because nobody anymore writes diaries or letters), but school awards certificates, the doge's laundry bills, Lady Buxom's wine merchant's receipts. When we find this crap in a plastic box in our basement, we think my God that was forty years ago who gives a crap and we throw it out.