This is still, partly, why people stay in the wine business.Or at least it's one of the perks of it. When bottles have damaged labels, vendors replace them with better-looking product at no charge. They "write off," or kick back to the winery, or perhaps just suffer, the cost to themselves.  Un-sellable bottles then have to go somewhere; you can pour the perfectly sound wine down the drain and throw away the bottle, or you can take it home, with the manager's permission, fully appreciating your luck at working in the wine business.

Especially when it's Flowers Sonoma Coast pinot noir, 2011. An old descriptor from a previous life comes back to me. "Seamless." Retail, about $43. I had no problem finishing this myself in two nights. 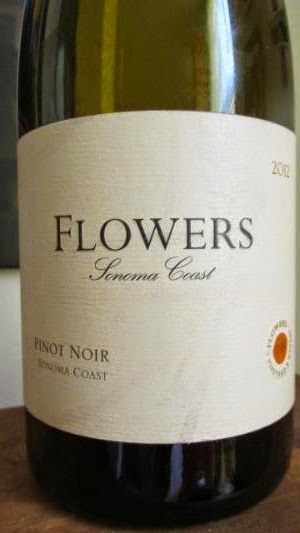 And why, in restaurants, is it always my friend and me who end up seated next to the raucous table of eight headed by the obviously attractive woman with the carrying voice, who told everyone what a slut her sister Bonnie used to be? And how she herself lost her virginity to Joe Somebody, but then when it came time to get married to someone else much later in life, she hated the whole process of planning "this Wedding" because she hated being the center of attention? The other member of the party with another raspy, effortlessly carrying voice, the man with the Italian accent, could hardly get a word in edgewise. All the remaining six seemed to have no purpose but to laugh. The elderly couple making out at the bar finally left. It was very crowded, and everybody cheered when the Hawks won.

And I'm glad to see, just by the by, that there have always been "food cranks." Or at least that there have been food cranks since before our current day of anxious "paleo" eaters and people who are intellectually adrift enough to hate bread because some author told them to. Imagine hating bread! It would be like hating the moon, or water. I'm reading Wodehouse's Jeeves and Wooster stories again (circa 1920s), as they are always a tonic to the soul. In "Jeeves and the Old School Chum" we meet Laura Pyke, friend of Mrs. Bingo Little. When the Pyke visits Mr. and Mrs. Little for a few days, misery ensues because she insists on lecturing everyone on how seriously a normal diet plus cocktails corrodes the "stomachic tissues." Worse, she forces her food crankiness into the kitchen itself. Mrs. Little thinks her old chum is a high priestess of modern thinking, and so lets it happen. Out with the "jolly chunky repasts" that Bingo and company love, steaks and sandwiches and things, and in with the proteins and grated carrots. Of course Jeeves steps in to resolve all. But in the meantime it is reassuring to know, as Miss Marple would put it -- and if only she and Jeeves could meet! What a story! --  human nature remains so much the same.
at April 04, 2015