My fatheads know that I sometimes like to import posts from other places -- my own, usually. 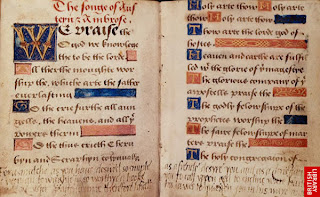 Lady Jane Grey's prayerbook, believed to be the one she carried to the scaffold. The pale writing at the bottom is a farewell message in her own hand to the lieutenant of the Tower, adjuring him to obey God's laws. (Image from the British Library online gallery.)

Political events moved quickly in an age when royalty -- and its henchmen -- still governed by divine right. Lady Jane Grey's famous nine days as Queen (she was a scion of the Tudor family through her descent from one of Henry VIII's sisters) sped by in mid-July, 1553, after the death of the teenaged king, Henry's long sought son, Edward. In quieter times July would be a month for the royal court to begin its summer progresses to freshly cleaned rural mansions. Smallpox, the plague, and the mysterious "Sweat" were the scourges of the season, especially in London. Filth, sickness, vermin, and bad teeth were a part of all people's lives to an extent that we can hardly imagine. So was hunger and the fear of hunger. In the country, a supply of beef and mutton would already have been slaughtered at midsummer, and would have to last, salted, till winter. St. Swithin's Day, July 15th, was a day for the farmer to look at the sky with apprehension: rain on this day was thought to mean a rainy summer and possibly a spoiled harvest.