People hate bad weather, but I think there are times when rain, cold, whipping winds and darkness can be very comfortable. That is, of course, when you are home safe, have the evening free before you plus the following day, and can indulge yourself with a cocktail, Chopin, some cheeses and the cat. She walks repeatedly, delicately around the computer keyboard, purring and stretching a back leg just so. One must peer over her arched back, and around her big fluffy tail, just so. Do you know the photo of the medieval cat's inky pawprints, discovered on the pages of a 15th century manuscript in Dubrovnik? Dubrovnik is in Croatia, rather a famous ancient city. It used to be called Ragusa, and is, so they say, the most beautiful medieval walled city in the world. 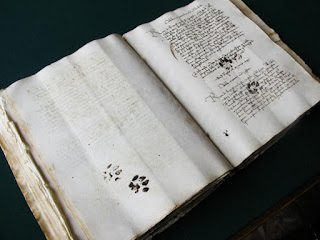 I hope the cat in the year 1400-and-something was gently steered off the book to the stone-flagged floor, there to be given a distracting treat, and not flung headlong out a clerestory window by an enraged scribe. I myself have a second cat who is not nearly so graceful as the first, especially around computer keyboards.

And I often think, during election years especially, that someone should find a way to popularize the riposte, "You're in Dubrovnik, I don't hear you," as an acknowledged formula to deflate poltroon candidates, rambling bully professors, malicious journalists, straw-man debate opponents, hectoring trolls, and other such people who chloroform debate while pretending to advance it. You're in Dubrovnik -- I don't hear you would be a way of saying, you eternally lie and I no longer expend any energy for you about that. The little speech is one that Mia Farrow's character says towards the end of Rosemary's Baby. She looks straight ahead and grips a knife I think, as she confronts all the people in her apartment building, and life, who are devil worshipers and are after her "little Andy or Jenny." Chief among the coven are the too-solicitous old neighbor couple, who at this climactic scene are supposed to be vacationing innocently in Dubrovnik, but clearly are not because there they are in the room. They attempt to soothe and reprove her. She speaks the liberating words.

"You're in Dubrovnik. I don't hear you."

The rain has stopped, but the weatherman says a freeze is settling in, so we are even cozier. The Chopin has been a recording of the complete Nocturnes, which you may access on YouTube; our pianist here, one Brigitte Engerer, (1952-2012). She was known for being little-known to the public but hugely respected by peers, for being "always chicly turned out," and for chain-smoking Gauloises.

What else better to do with the rest of the evening than Blog the Sources? We have reached Matthew, chapter 7. Let us see what, just what, the Sources will give to us on any ordinary rainy dark Tuesday night in February. Revelation, is it now? We will indulge in pure stream of consciousness reactions.

"Judge not, lest ye be judged." The instruction not to criticize or really judge another person -- followed by the explanation that whatever "mote" or speck you see in your brother's eye, the "beam" in yours is far bigger -- must have had a civilizing influence. Condemnation and then violence can always hack away at one another. Perhaps what has a chance to stop both is an internal control: "I have no right to condemn, I have my fellow's fault ten times over."

And yet this instruction is followed by "do not cast your pearls before swine," i.e. don't offer precious things to people who can't appreciate them. Precious spiritual or intellectual things, correct? Instructions, even? -- since who owns pearls? But isn't that itself a judgment?

"Ask and it will be given to you, seek and you shall find; knock and the door will be opened to you." Now here we come to something. Is this a new definition or understanding of God? God who is personally present, a petition or a thought away from every human being. We know of the God whom Abraham argues with over the punishment coming to Sodom and Gomorrah, the God with whom Moses spoke "face to face." We have heard of Elijah's "still small voice." and of God who told Jeremiah, "before I formed you in the womb I knew you." Now God himself is a kind of parable: the father who will far less "give his son a stone when he asks for bread," than a human father, "wicked" as he humanly is, would do.

"Therefore." All it takes is one word, missing in modern translations and present in the King James, to draw together the chapter into a lesson. Yes yes, don't judge other people, ask and you shall receive, "do to others whatever you would have them do to you," yes we get it. But no. No, "therefore all things that ye would men do to you, do also to them." We are not talking about random sweet-natured deeds. If you want life to be coherent, then approach its component parts coherently: do not judge your fellow man, and ask of God what you want, and therefore -- keeping the coherent pattern -- behave toward your fellow man as you want him to behave to you. You are already beyond mere non-judgment. If he too is living coherently, if he too just got done asking God for what he wants, and is now facing the world and his business therefore doing unto others, etc. "This is the law and the prophets."

But who actually can do this? The instructions seem simple and sensible enough. No sooner does Jesus vouchsafe them, though, than he gives in quick succession four short word-pictures (flash fiction, shall we say?) about 1) the difficulty of entering "at the narrow gate," about 2) recognizing good and rotten trees by their sound and rotten fruits and of course he means much more than trees, about 3) even "disciples" who do what he does -- drive out demons, do "mighty deeds" "in his name" ("wonderful works," the King James says, which seems less cartoonish than mighty deeds) -- being rejected by him at the end, finally about 4) the "wise man" who acts on his teaching being like a man who builds a house on a solid foundation.

Why the narrow gate, the exclusivity? He seems almost gleeful about it.

And "when Jesus finished, the crowds were astonished, for he taught as one with authority, and not as the scribes." I'll bet they were.

Now YouTube has segued into Clair de Lune, Debussy, and both cats are asleep.
at February 02, 2016