"Eating lumps of expensive middle-cut salmon with a country appetite"

I have always thought the above line, about eating salmon with a "country" appetite, has about it the vigorous ring of a caption, or a blog post title. It comes from the last of E.F. Benson's six Mapp and Lucia novels, Trouble for Lucia. In this one, Benson has the stroke of genius that brings together his two greatest characters, Lucia of course, and Miss Susan Leg, renowned multi-millionaire authoress of schlock romance fiction under the nom-de-plume Rudolph da Vinci. When Miss Leg unexpectedly visits dear little Tilling, Lucia's arch nemesis Elizabeth Mapp "gets hold of her." This means she invites her to dinner, escorts her about the town on sightseeing tours from which everyone else is shooed away, and plans receptions for her only when she is good and ready to share this social prize with the rabble. One night Elizabeth and her husband Major Benjy ask Susan to a "plain, simple potluck" dinner which they can hardly afford -- middle cut salmon, a brace of grouse, caviar, Melba peaches -- Benjy chortling as they sit down that he "hopes his guest has a country appetite." For that feast, of course the authoress has. Benson gives us his vigorous, ringing line. Miss Leg barely pauses to take breath amid the gossip, while "eating lumps of expensive middle cut salmon with a country appetite."

What they enjoyed was " 'a nice fresh-run fish' " Benjy says, from a river, whereas what I've got is a middle-to-tail-cut portion from a humbler and cheaper creature, farm raised in Chile or Norway probably. When it's a plain leftover as well, I put it into a pan with some milk and a pat of butter and a few spinach leaves, and heat that through while I cook a pot of angel hair pasta alongside; and if my smartphone photograph also takes in the extraneous purple tea kettle, that must serve as a little visual treat and refreshment for you, to atone for the fact that my food pictures don't look like the beautiful closeup shots of plates, or it might be beef or steaming vegetables or bright tangerine sorbet in rustic glassware, all gloriously backlit by the natural outdoors; and then there are casually placed wooden kitchen chairs, and a fringed napkin folded over once, -- which you see in magazines and food blogs. No, not like those. 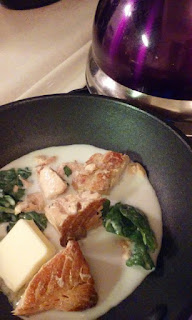 Salmon: from the Middle English salmoun, by way of Old French saumon and Latin salmo; and before that, we see in our Webster's only the mysterious < ?. Another one of those fine English words which means only itself. It makes therefore a fine addition to our "Twenty English Words" project. We have strayed a bit from our original list, granted. In the beginning it included pretty ideas like book, lamp, moon, son, and daughter. Instead, in the natural course of writing, we have ended up investigating some pretty things yes -- dream, apple -- but also odder items -- clothes, and poltroon. Of salmon, Dr. Johnson says only it is "a fish." He is aware of the French and Latin derivations.

You know, my fatheads, I still surf the food blogs sometimes and when I do I end up feeling quite a dinosaur. Or " 'quite a hermit,' " as Lucia would say. " 'My music, my books ... Georgie dines quietly with me, or I with him. Busy, happy days!' "  The food blogs pop with video ads, and bursts of color from hand-tinted smartphone pictures sent to Snapchat, plus shots of ocean or beach if the blogger has gone to some conference or other. And they link through to what they're reading, and it can be awfully thin stuff -- unparagraphed stream of consciousness memoirs about artist-colony love affairs, apparently lesbian because at least that's somewhat titillating -- and the video ads pop there, too, for Tiffany's and Brahmin. Perfectly natural, as this is New York magazine. Only what is it about our stern age that refuses to allow the woman artist-eccentric any enjoyment of clothes or personal appearance? Eighty years ago Benson wrote novels full of lady writers and painters, who could have graced any London or New York smart-set dinner party dressed, if they wanted, in a man's suit, cravat, cloth topped boots and monocle. "Marcelled" hair too. We think of Quaint Irene, or of Secret Lives' delightsome Lady Eva Lowndes, forever seeing other people's invisible halos. Our age will have none of it. An elderly lady poet looks like a wizened, uneasy lumberjack. When poets' words seem often lovely, I want them to be lovely themselves. I don't mean simply pretty. Let me help: here is Susan Leg herself, at a dinner party in Durham Square, in E.F. Benson's Secret Lives (1932):


She leaned forward with her chin out in an attitude of rapt expectation, her face looking of incredible insignificance underneath her spider-webbed hat which was gorgeously trimmed with bunches of artificial grapes in three colors, black, red, and yellow, and garnished with crimson vine leaves. She wore her string of pearls around her short, plump neck; ...she wore a bright green silk coat over a muslin dress in which was pinned a cluster of malmaisons [pink carnations]. She was enjoying this party given in her honor quite immensely ....

Meanwhile you and I, we dinosaurs, hardly smart set types, we don't do Snapchat. Nobody offers us trendy video ads. We are blogging the Gospels, posting amateur photographs of leftover salmon in a pan indoors at night, and chortling over English social comedy novels of the Jazz Age. It snowed that night, I mean the night of the salmon and the purple tea kettle; the calm, hushed snowfall that makes you want to go out and take a walk in the calm, hushed, strangely gray-bright world -- even though you likely don't because you just got home from work and after a moment's reflection, you opt for pajamas and a cocktail. Children's voices, or the raspy grind of a snowblower, echo muffled from before and behind and everywhere, as if bouncing off the underside of some huge gray-bright blanket. 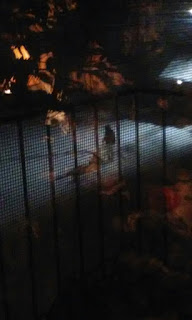 The accompanying wine was delicious, a Valpolicella from Buglioni, retail, about $13. It looks like this. Natural light. 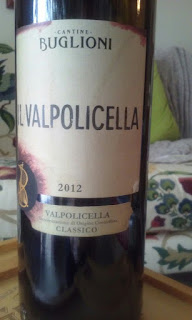