The word apple is not on our original list, but we pursue its definition anyway because we have just learned how to drop a slice of apple into a gin sour, and then how, after dinner, to eat the rest of the apple for dessert alongside a tiny, tiny glass of tangy and half-sweet Madeira.

Apples and gin and Madeira. They seem so English, so colonial, so all-around-sturdy 18th century, don't they? It tempts us to set Pandora to harpsichord music -- "dainty Scarlatti," as Lucia would say -- and then to admire the Duchess of Northumberland's witnessing of the royal table, circa 1761. The king was the not quite twenty-three-year-old George III. (Our own George Washington was a young buck of twenty-nine.) The Dss. witnessed mostly meat, meat, and more meat.


Their Majestys constant Table at this Time was as follows, a soup removed with a large Joynt of Meat and two other Dish such as a Pye or a broyl'd fowl and the like. On the side table was a large Joynt, for example, a large Sirloin of Beef Cold and also a Boars Head and a Sallad; 2nd Course always one Roast, one of pastry and Spinage and Sweetbreads, Macaron, Scollopt Oysters or the like. Their Supper consists of two made Dishes usually composed of Poultry as Chickens, smore Turkey a la Bachomel, a Joynt of Cold Mutton, Buttered Eggs, Custard and constantly Veal and Chicken Broth.

Tucked in amid the meats, she saw also custards, broths, "Bachomel" -- bechamel sauce, probably? -- macaroni, butter, eggs. In other words she saw many things creamy and sweet-soft. Perhaps the 18th-century table still reflected the middle ages' enjoyment of pappy foods as a counter to salted meats and fish; note their Majestys eat not a single piscine creature in April 1761. Lent was over, Easter had fallen on March 22 and everyone was very likely still heartily sick of fish. Perhaps also, among those Joynts, the soupy, custardy spoonfuls represented not just a medieval carryover but a (time-honored) relief to weak teeth.

In any case I think food historians and cookbook writers have noticed, when it comes to old menus like this, that our not-too-distant ancestors either did not serve fresh vegetables much, or if they did so, chroniclers considered it too insignificant to mention. Or did royalty not deign to sup on cabbages at all, for instance? In the duchess' paragraph, above, nothing green is to be imagined except "Spinage" and "a Sallad," and even the spinach sounds as if it was part of a "made dish" with the pastry and sweetbreads. Another pye, maybe.

Fruits make as little an appearance as vegetables. Yet Harold McGee in On Food and Cooking (Scribner, 1984, 2004) says that the Western world has been eating fruit for dessert since antiquity. Apples, pears, cherries, grapes, figs, dates, and strawberries were all "Mediterranean natives, used BCE," he writes (p. 250). I google "English apple" and I find a list of seven just to start with. One variety is called the Codlin, used in a famed baked dish called Codlins and Cream. This instantly sounds lusciously 18th century, but the name now seems to have been bizarrely given over to a purple hairy-stemmed wasteground and swamp flower, Epilobium hirsutum. Nice people in rural Wales who call a blog Codlins and Cream show the flower, not the apple treat, as a header photo. Or used to. Coincidentally she had problems with Blogger, too, and had to reboot -- Codlins and Cream 2, why didn't I think of At First Glass 2? -- and to hope that people re-find her.

Meanwhile, Karen Hess in her great redaction Martha Washington's Booke of Cookery (Columbia University, 1981, 1995), explains briefly that the codling apple, hard, tart, and fit only for cooking, was known at least from medieval times and that its middle English name, querdelynge, may come from quert, "meaning sound or hard" (p. 95, the pertinent recipe being "to make a codling tarte eyther to looke clear or greene"). She thinks the word has nothing to do with codling, the fish, even though the codling apple is rather elongated (fish-like?) in shape .... All in all one hopes that Majesty, or anyone, might have savored once in a while simply a nice sweet apple, with a glass of Madeira.

We return to the second of our twenty English words: apple. Webster's: "from the Middle and Old English appel, meaning fruit, apple" -- I love words that only ever meant themselves -- "eyeball, or anything round; akin to the the Old Irish aball, meaning apple tree, and to the Latin Abella, 'the name of a Campanian town.' " No really? Why would ancient Irish, Latin, and English words all have to do with a fruit, the eyeball, and a town? Is the town the modern Avellino, in a southern Italian subregion of Campania that I'll wager we've never heard of? -- Irpinia? Italian travel websites make the legendary "green Irpinia" sound exquisite. They tell us,


It is best discovered gradually, on a journey through the wilderness that whispers of ancient times, when this land was inhabited by Samnites, Romans and Longobards. Ancient villages are nestled in the green of the valleys that begin at the feet of the Partenio and Terminio Mountains, covered by beech, fir, oak and chestnut. In addition to the archaeological sites, massive castles recall not only wars and plundering, sieges and battles, but also celebrations and elegant courts.

Exquisite. If ever I travel, I want to go to the little obscure places like this. I intend no slur. Since the point of travel is evidently to go and look at people who are home, why not do it wholly, and go see places where the people's home life is presumably not much disturbed by the surreality of visitors anyway? Rural West Wales. Irpinia. And, getting back to apple (again), why doesn't our standby Doctor Johnson know much more than we do? He says only that apple, from the Saxon æppel, is 1. the fruit of the apple tree [Pope's Odyssey], and 2. the pupil of the eye [Deuteronomy 32:10]. That "the apple of one's eye" should mean a favorite, and the aperture at the center of the eye literally, and should have links also to schoolchild, and little doll (pupilla), and the reflection of oneself that one can see in another person's eye -- itself akin to the Hebrew idiom "little man of the eye," which is what Deuteronomy actually says, not tapu'ach, apple -- all this constitutes some interior traveling which we will leave for another day. 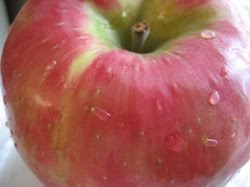 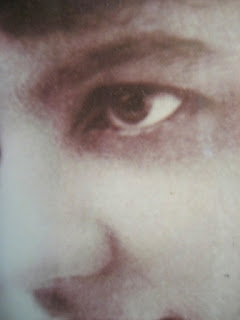 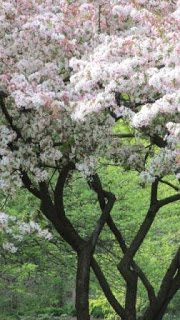