Once in a while you pick up a classic and find you cannot get more than fifty pages into it.

I was just barely beginning to hack into the two-inch-thickness' worth (paperback, 1994) of Rebecca West's Black Lamb and Grey Falcon: A Journey Through Yugoslavia (1941). Already in the Prologue she says most encouraging things.


I knew that in the next war we women would have scarcely any need to fear bereavement, since air raids unpreceded by declaration of war would send us and our loved ones to the next world in the breachless unity of scrambled eggs.

...the word 'idiot' comes from a Greek root meaning private person. Idiocy is the female defect: intent on their private lives, women follow their fate through a darkness deep as that cast by malformed cells in the brain. It is not worse than the male defect, which is lunacy: they are so obsessed by public affairs that they see the world as by moonlight, which shows the outlines of every object but not the details indicative of their nature.

And, she writes on Fascism, when it was still dutifully understood as some bizarre but horridly recognizable new weed of a political construct totally outside the human experience, and not as what it is, frightfully confident liberalism on frightfully strong steroids:


All forms of compulsion are practised on any element within the state that is resistant or is even suspected of retaining consciousness of its difference from the dominating party.... [Christian wedding cake bakers -- or fill-in-the-blank dissenters -- anyone?]


The Prologue to Black Lamb and Grey Falcon bedazzled me further, because it reinforced a notion I have had since reading Gone With the Wind at the age of 12, and gawping at its easy references to the Borgias and Thermopylae and the First Triumvirate of Rome. Withal Scarlett O'Hara was presented as a charming ignoramus, because she did not know these things! It was astonishing, what the author and her editors expected the reading public of 1936 to absorb. My notion was that when everyone was better educated, writers wrote better books. That rising tide did lift all boats.

And here was Rebecca West, same era as Margaret Mitchell, real name -- West's, not Mitchell's -- Cicily Isabel Fairfield (why cloak that?) getting ready to plunge into the Balkans, remembering the three royal assassinations that shaped the wars of her youth and therefore her fate -- hence the talk of being blown to eternity amid the morning's scrambled eggs, it did happen to some -- and French poetry is a part of her life, too! On page one. Before drifting off under an injection preparatory to surgery, West is reading "that sonnet by Joachim du Bellay which begins, 'Heureux qui, comme Ulysse, a fait un beau voyage [Happy he who, like Ulysses, makes a good journey]." She is civilized. This, along with most of the books of her era and before, so easily showed it.

Now I did quickly begin to suspect that the du Bellay wheeze (as Bertie Wooster might say) might be schoolgirl memorization. I took French too, and I could quote, par exemple, Francois Villon in a pinch, just like anybody. "Mais ou sont les neiges d'antan [Where are the snows of yesteryear]?" This Villon is the poet whom Bette Davis' character in the movie Petrified Forest keeps calling "Francis Vill-yun," while erudite wanderer Leslie Howard looks on with pity and adoration (same era).

After West's Prologue begins the Journey. I was still bedazzled, for where should she begin this but in the city of Salzburg, Austria, in Mozart's house. What a thing to think of. I have actually been there. Rebecca West and I have stood in the same room and looked at Mozart's spinet, perhaps fifty years apart. She visited in about 1936, I in 1983. In fact she died, at the age of 90, just a few days I think before the Icelandair plane took off for my first and no doubt last trip to Europe. Hear me Lord. All I could think of, as the wheels inexorably rolled, was that I wanted to be home for an ordinary evening with my gray cat.

Upon reaching the Journey after the Prologue, I began to be less bedazzled and more annoyed with BLGF, as the great thick majestic book is called among the citizen-reviewers, whether pitying or adoring, on Amazon. (I love this service, by the way. The negative reviews of any book always contain the most wonderful nuggets of truth and crankiness and wildly unfounded but probably just supposition.) My disappointment seemed the severer because Rebecca West's word-painting is very lovely. Not quite as gleaming and many-prismed as Dorothy Carrrington's Granite Island, but very good. One hates to give up on an 1100-page book, closely printed, after only fifty pages. One stands stupefied at a 500,000 word memoir, and at a lady who can judge in passing that the embroidery for sale in a Yugoslavian village market is inauthentic Slav, only imitation "Victorian Berlin woolwork." Still, when her writing began to drift into the dotty territory of madmen and dreamers and princes lost in the woods, I balked. I met and disliked this style, I am sorry to say, most thoroughly in the work of Elie Wiesel. Oddly, he of all people came to me right away. Central Europe, again. No word painting. But the same era.

Rebecca West begins the Journey chapter on the train with German tourists, on vacation from Nazi Germany, which is a thing you don't think about. They complain that Nazi party-loyalist tenants in an apartment building can't be scolded or evicted, whatever constant ruckus they make ... " 'the private citizen hasn't any liberty, but the state hasn't any real authority either.' " If you want to vacation you may only go to certain approved places, because when you holiday of course you are taking your money out of noble and needful Germany ....

But for West the main thing is, these people are tourists. At long last I think I understand what a tourist is, for I have read my share of travel writing by people who sniff at the sub-species. The tourist is concerned that unexpected and disagreeable things may happen before he reaches his destination. Perhaps in that way he is the ghost of a true pilgrim, only with nowhere really significant to go. A real traveler, on the other hand, looks forward or claims to do, to the unexpected. All the hotels in Zagreb are so comfortable and all the food good. If the tourists can't after all get into one or find the other, they will find substitutes just as good. In fact West considers the tourist's worry, paradoxically, to be dithering and "inefficient."

When the train arrives at Zagreb the real holiday, true foreignness, begins. She looks out the train window to see an elderly man running alongside the tracks carrying an umbrella, in the pouring rain, holding the umbrella well out from himself and getting no shelter from it while he calls repeatedly " 'Anna! Anna!' " Three times he makes this performance, running up and down alongside the train, calling for Anna. Rebecca West, refreshed, now purrs, "I was among people I could understand."

This is what makes me abandon a thousand-page, twentieth-century classic at page 38. Am I wrong to do so? Remember what Ernest Hemingway said about the mental transformation of the downtrodden husband in The Short Happy Life of Francis Macomber? "Fear gone like an operation." In my case, it was curiosity to read more, gone like an operation. Rebecca West's very next anecdote, about her bizarre tour guide at Zagreb, who once wrote a flamingly angry political article, and submitted it to "the censor," but then had to delete all of it because he was the censor himself -- that tale, so to speak, even erased the scar from the operation. " 'In what capacity, as author or as censor, must I be untrue to my ideals?' " she claims he asked proudly. Again our Rebecca swoons at magical foreignness, and purrs, "I am among people I understand" (p. 46). Later she explains this Gregorivitch or whoever in well-sculpted prose. He was heir to a different time, when an office and its responsibilities outranked the man, the man did not do the job to his own satisfaction or convenience, depending on what sense it made to him.


"He must have been conscious, all his life, of the social value of patriotic poets and, for the last unhappy twenty years, of censors. Therefore it seemed to him that he must do his best in both capacities, not that he should modify his performances to uphold the consistence of his personality. That, I could perfectly understand ...."


And this is where I began thinking of the books of Elie Wiesel. He was not a travel writer but he would write a story like that, and about the umbrella-man too, men who were heroes of some other code, madmen or dreamers who then disappear in the woods. The key is that he understands them. After his first book of terrible witness, Night, he tended to venture into literary realms where no one can follow because he uses storytelling to paint himself as a perceiving subject, rather than to make clear on the canvas what he wants anyone to see. Is that what it means to be a Gnostic? -- to be privy to secret meaning? When he begins about beggars and princes lost in the woods, fine, but I don't know what he is talking about, nor whether he is hiding, or revealing, anything true.

It's the same for Rebecca West. Having established that of course she is not a mere tourist, looking at things as they are: when she says an old man ran up and down alongside the train doing something that makes no sense, or when some other man wrote and censored his own essay because each act was upright in itself, fine, but I have no interest in reading further because I don't know what Rebecca West is using language for. One hates to be the cynic saying these things don't happen, except perhaps among Slavs, who are mad. I don't like that dismissal when it comes to the Bible, say. "So religious people are mad, so what." Since Rebecca West is not actually divine revelation corroborated by witness, we are left only with her, fascinated by herself as the perceiving subject, restful among people she can understand. Which seems like a bald lie. At any rate it wasn't enough to carry five hundred thousand words.

I said that I love the reviews on Amazon. Black Lamb and Grey Falcon gets a lot of five stars, and only a few one-stars. Probably the best assessment is from a five-star reader who thinks that the people who hate this book are hung up on West's sympathy for the Serbs, a nation much admired in her era but not in ours. He assumes the detractors even wade in that deep. I nod at the one-star snorts. " Much too long." "Drivel." "The Britisher abroad in that era." I close Black Lamb and Grey Falcon at page fifty, wondering at the taste of another era, and deciding, No, I'm not being idiotic. 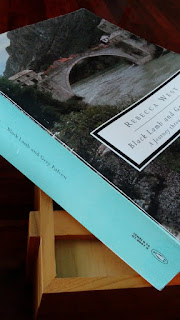