The moon, and the modern mind; and things

Really. One comes across the wildest things in Barbara Pym novels. Here is page 2 of No Fond Return of Love:

"But at least it would be interesting, she told herself bravely, to share a room with a stranger."

One imagines this sentiment rendered into a work of art to be found for sale in the Acorn or Bas Bleu catalogs. Distressed wood, I think, unframed, or a canvas painted over in pink maybe. The words to be spelled out in blue, black, and sea-green; some of them placed sideways and some very much larger than others. Certainly interesting, room, and stranger would be written large. She told herself bravely might go sideways.

And then there is this, from the same novel.

" 'I suppose nobody really knows,' said Dulcie. 'It might be like the first night on board ship when nobody changes for dinner.' "

I love little bits of knowledge like that. They are the peaks, perhaps the froth, of a civilization, capping the bulk or ocean of magnificent, fathomless, living achievement below. When the peaks and the froth are forgotten, when they are not thrown up anymore by the living bulk below or are not recognized, well it's time to worry.

The same thing with the moon. Though the moon is much more basic.

I work with a man who is of those who say "I'm not a conspiracy theorist, but." Why does not only British literature but British comic television seem to have an answer for everything? -- for one thinks now of comic John Cleese, interviewed around the time of some Fawlty Towers anniversary or compilation. He noted that the character Basil Fawlty was one of those prudes liking to protest "I'm not a prude, but." What Basil really means, Cleese laughed, was "I am a prude, and."

What my friend really means, I fear, is "I am a conspiracy theorist, and." He entertains quite a few, the most recent of which was something to do with a great light seen at "the Arctic -- the South Pole," [sic, of course], over the length of a whole night. It wasn't a helicopter, and it wasn't a passing comet. It lit up everything like it was day, for hours, and they're not saying what it was because they don't want you to know. It was like another sun.

A second man in the warehouse had marveled -- as my friend told the story -- "so you think there's another sun?" "No, I don't think that," my friend said, testy probably.

I marveled at him too, but noncommittally. This technique of manners helps greatly in society. "Wow, I hadn't heard that...."

Then I did some searching at home because the internet is out there for you to do research on, and anyway isn't Christian love (remember we've been blogging the Gospels occasionally) all about "willing the good of the other --- as other"?

It turns out that the great light at the pole, whichever pole, that shone all night and wasn't a comet or a helicopter, and lit up the landscape like it was day, might have been the full moon. The full moon will do that, at the poles' (whichever one's) winter, when night lasts for months anyway. This in turn would correspond to my friend's story of "what they don't want you to know" having happened recently. It's been winter in the Arctic.

Far more than shipboard dress, I sometimes think the moon should represent that great bulk and froth of civilization, all that is lost among ordinary people's knowledge of the world. The moon is very basic. Knowing what it does and how it appears is like knowing enough to boil unsafe water, or to avoid a wild animal .... The earth only spins one way. A half-moon overhead, in an indigo-blue, late winter dusk, is heading toward the west, like the sun toward sunset. This is literally just a phase. All of the moon's phases are regular and eternal. It will grow to full, and then shrink to a crescent facing the other way, and while it is doing that you will see it, in a week or so, weirdly in the western sky at 9 or 10 in the morning. It's setting then. After that, it will be a crescent facing the other way once more, only it will set -- in the west of course, we only spin one way -- but at twilight. You might even see the outline of the whole moon then, faintly, as if drawn with faint moonshine chalk from the guiding tips of the crescent. I believe this is called "the old moon in the new moon's arms." Things like that.

As for other things. Here at Pluot we have read Rex Stout's Please Pass the Guilt (1973). Excellent as always, even though the mystery is never such as to make Nero Wolfe lean back in his chair, close his eyes, and move his pursed lips in and out, which is the sign of real intellectual struggle for him. Author Stout deftly threads the modern world into what he might have kept, always, the pristine, postwar, somewhat gritty but never degraded "private dick's" Manhattan of say, the month of Sometime, 1952. Here in the late 1960s, Nero Wolfe fears his cleaning lady may be a Black Panther; the method of murder is a bomb in a desk drawer; there is an Arab terrorist false clue; and a liberated young woman studying etymology speaks the words pecker and prick. (And why does modernity always seem to equate with 'more degraded, more vulgar'? The '50s were modern too.) Wolfe still says " 'Pfui' " when exasperated, and cookery and orchids still feature. 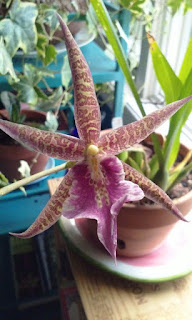 As for still other things, well. Marvelous biography of Alicia Markova by Tina Sutton (The Making of Markova, 2013). At first one thinks the author could have cut down the bulk a little -- 623 pages -- by not reprinting every press clipping about the prima ballerina there ever was. But then, it does help recreate some of the excitement about her at that time. In Kansas City and everywhere.

Lastly (one must stop somewhere), what about interior decoration? An English manor called Barsham is for sale for millions of dollars. Henry VIII used to visit on country jaunts. So one longs to bring Tudor effects into the apartment, like steeply pitched ceilings, stone fireplaces, and random heavy wood mouldings and doorjambs. I may have to settle for "heavy, rich draperies -- nothing filmy or lacy" as online interior decorating guides suggest. But "MCM," mid-20th century modern, is also very chic: streamlined looks, low-slung plain furniture, colors of pink and green, and what I think of as those '50s advertising sparkles everywhere. There's even a giant sculpted one in the lobby of the Inland Steel building in Chicago. 1957. You can just see Cary Grant in a suit and thin tie walking in, on some very suave business. I'm sure he knew what the moon is.