Things have come to a pretty pass since my grandmother's day. I am talking of moral matters, but not perhaps what you think: she was surprisingly blase about the facts of life. She is the one who gave me the excellent bit of wisdom, "You know what they say -- when a couple get married, the first baby can come anytime -- after that it always takes nine months." That's a saw whose humorous decency only makes sense in a culture where people get and stay married. Who cares when babies come now, of if they do at all? Her little saying reminds me of the the Jewish proverb, I think from the Talmud, that since the parting of the Red Sea, God has done nothing else but arrange marriages. In other words, the difficulty of doing that successfully, for all mankind for all time, is as stupendous a miracle as the one by which the children of Israel walked between walls of water to freedom. Again, the proverb, the reflection, only has meaning in a culture of marriage. Try telling it to a group of children in a Sunday school class in an era of divorce, and you will get gales of laughter because God is so stupid.

The birds and the bees, Nana knew and accepted. "Why, 'a man had only to put his shoes under my bed and I got pregnant,' " she also quoted, not in reference to herself I don't think. Just another saw, a humorously decent reaction to life. It was wanton profanity that offended her. Luckily she heard little of it. She never went to the movies post-George Raft, and of course she never lived among foul-mouthed people. The one time she heard the word "s---" in public, she was speechless with outrage.

A man approached me and asked where we keep the mix needed to make the new cocktail, the Blue M ---- f----er. Just like that. He pronounced the whole word. Not "blue." The other one. He felt absolutely no compunction about speaking this word in public, to a fellow human being, still less to a woman -- ah, for the quaint days when men guarded their language around the gentle sex! -- and in a retail setting too, where we are all more or less helpless to defend ourselves in the face of the glorious Customer. I suppose I can count myself lucky that I had at least heard of this new drink a few days before. My son also works retail liquor. He told me someone had asked him the same question. Better to have known what the customer was asking about, than to have had to presume he was simply mad, or being offensive. To Nana, he would have seemed both. Small comfort.

So, as I ask in my title, "Who invented the Blue M---- f----er?" In truth, I don't care. Whoever you are, master Mixologist, you're a poltroon, too. I regret that our society has bred you while my grandmother's did not. But that's no excuse. Even in the midst of decays both major and minor, any human being can still judge very basic right from wrong, dignity from indignity. Judaism's seven Noahide laws pronounced so, and antiquity's "natural law," bequeathed to Christianity through the church fathers, also said so. You, mixologist, human being made in the image of God, you should have had the minor decency not to name your new cocktail that. All you are doing is sending people into retail stores speaking the word, and so ladling another unthinking drop of vulgarity into everyone's day and world. Even my grandmother's little proverbs about sex were clean and decently humorous.

Besides, the drink sounds ghastly. It cannot be other than a potent sugar bomb, combining as it does all the Long Island Iced Tea ingredients, namely gin, vodka, rum, and tequila, plus sweet and sour mix plus blue Curacao plus Seven Up. Our cocktail master, Charles Schumann, refuses even to make the Long Island Iced Tea for a start, because that recipe alone shows such disrespect to the distiller's art in hashing together the four spirits called for, especially gin. It follows, then, how absurd this freak offspring of the hash must be.

We choose to obey Schumann. He -- rather like the ancients, rather like Thomas Aquinas, talking of natural law -- has standards and has thought things through. In his minor sphere, he is civilized. And in this age of moral collapse, we grab onto any civilizational decency we can.

A footnote: twenty English words: Webster's says poltroon comes to us from French, Italian, and Latin words having to do with young animals (poltro, colt, pullus, chick, "see POULTRY") and means "a thorough coward, craven." That is not what I mean by poltroon. I thought the sound of it somehow conveyed, cowardice perhaps, but more importantly utter, boorish ignorance, unmanliness, and juvenility. If we turn back to another master, Dr. Johnson, we find he attests it does just so. In his Dictionary a poltro'n is "a coward," he says, "a nidget, a scoundrel; base, vile, contemptible (Hammond)." We love that "nidget" -- it seems to describe someone who is a a moral midget, but even less so, because he gets an 'n' and not an 'm.' Only why did Webster's truncate Johnson's more full definition? And who was Hammond?

While we investigate, let's try a better cocktail. A colleague of mine told me recently of a drink that a colleague of his either invented, or merely knows. It has no name and I haven't yet tried it, but it sounds intriguing. Bursting with citrus juices plus a dash of pink grapefruit bitters, we can't call it so manly a thing as the George Raft. The Pretty Pass, maybe. Proportions are guesswork, based on long study under our master.

About an ounce (half a jigger) each of --

Combine all ingredients in a shaker with ice, shake and strain into a cocktail glass. Garnish with any small subtle fruit that will pair nicely with whisky, citrus, and high-end red wine vermouth ... pear? 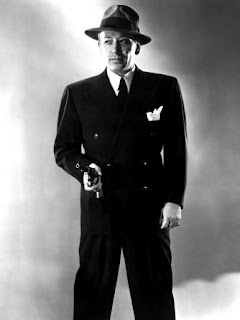