I went to dinner with an old friend the other night. We agreed that at our age, it seems time to stop being a "news junkie," to stop following every political story, and reading every website we already like, and then scrolling as usual through the comments, let's say the first twenty or so, on all the events we (and the commenters, who are largely trolls) can do nothing about. Nothing except vote on that biennial, eighteenth-century schedule our forefathers found good, which seems an increasingly charade-like gesture in this era of fast-moving world government, open borders by the stroke of a pen, and the Holy Father suddenly discovering the exhausted creed of Gaia as if it were new. And he's getting ready to present it to the next session of world government. "I always think I'll just look at one item for a minute before I go to bed," my friend said, "All of a sudden a couple hours have gone by."

"I know," I nodded while coping with my forkful of rigatoni in vodka sauce with sausage.

"Exactly," I said. "I know absolutely nothing about the sciences. And part of what it means to live in a free society is to be free of politics, at least some of the time."

"True, I never thought of that," she said. Me neither. Somebody else thought of it for me. I think it was Jonah Goldberg. So, back to the websites. Are we all just trolls? 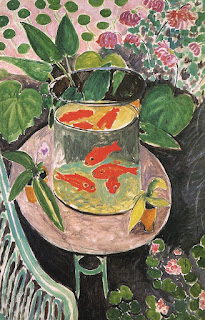 If so, this troll had a moment of disappointment a few days ago, when I discovered Matisse's gorgeous Goldfish on the art-reproduction website AllPosters.com, and excitedly placed my order only to learn We're Sorry this Item has Been Discontinued. Here's another category of life about which, I'll bet, most people can admit they know almost nothing: great art. I mean to truly try to know it: what are your favorites from Matisse, what was he like, how did he live? With what did he fill his hours, and with what do we? Were the political circumstances of his era just as objectionable to him, only he shrugged and painted? It looks like it. 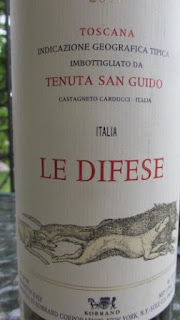 Above, Le Difese, a super-Tuscan, which means a Tuscan-made blend of a non-traditional Italian grape, in this case cabernet sauvignon, with the traditional one, sangiovese. The producer is the famed estate Tenuta San Guido, the winemaker, Sebastiano Rosa -- thus Le Difese is a sort of younger brother to the estate's great ones, Sassicaia and Guidalberto. And it is just what our teacher for this lesson, the blog SuperTuscans, says it is: "warm, ripe, with seductively soft tannins and a burst of freshness." It's also affordable, as legendary super Tuscans go: retail, about $30, perhaps half that in a good sale. The name Le Difese, we're told, refers to the "defenses" the boar on the label has against the dogs pursuing him. Namely his tusks. What an interesting political metaphor that might be.